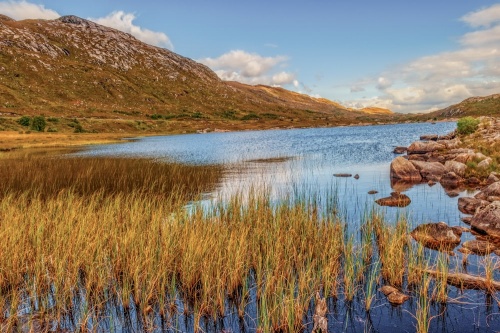 Loch Cluanie is an inland loch linked to the southeastern end of Glen Shiel, formed when the Cluanie Dam was built across the River Cluanie in 1955. The North of Scotland Hydro-Electric Board created the dam as part of a major hydroelectric project. The Board dammed the River Moriston and nearby Loch Loyne, feeding the loch water through a tunnel to the dam.

The modern A87 road runs along the northern edge of Loch Cluanie, and for much of the way it follows the route of an 18th-century military road built by General Wade to improve troop movement in the aftermath of the Jacobite Rebellion of 1745.

There is one settlement on the loch, if two holiday homes and an inn can be called a settlement. The Cluanie Inn is at the western end of the loch, with a parking area beside the inn allowing easy access to the loch for visitors.

The Cluanie Inn is a popular destination for walkers, as it lies at the start of several walking trails that lead into the hills that overlook the loch. Several of these hills are classified as Munros (peaks over 3,000 feet, or 914.4m).

A private road leads from the Cluanie Inn to Cluane Lodge on the south bank of the loch. The Lodge is the residence of the owner of the Cluanie and East Glenquoich Estate, covering over 20,000 acres of land, including some of the most beautiful landscapes in Scotland.

Loch Cluanie made the news in 2012 when a summer drought exposed an old drovers' bridge that had been submerged since the reservoir was created. The bridge formed part of the old drovers' road that was the original Road to the Isles, long before the modern equivalent was built from Fort William to Mallaig. 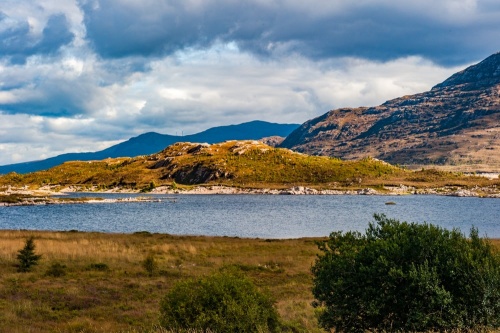 Looking south across the loch

One of the oldest forests in Scotland, owned by the Crown at least as early as the 13th century. Here you will find some of the oldest Caledonian pine trees in the world. One particular pine has been dated to 1485 and is thought to be the oldest in Europe.

One unusual feature at Loch Cluanie is the 'Cluanie Curtain' a weather phenomenon where a bank of rain moves across the loch from west to east, but rarely, if ever, reaches its eastern end.

To the west is Glen Shiel, the site of a battle between supporters of James Stewart ('the Old Pretender') and government forces in 1719. Jacobites aided by Spanish soldiers seized Eilean Donan Castle before marching south through Glen Shiel where they were met by government soldiers under General Wightman.

In a battle lasting three hours the Jacobites were routed, and the short-lived rebellion was quashed. The battlefield site is well signposted as you drive through the glen, with a parking area and interpretation boards.

Loch Cluanie lies directly beside the A87, 15 miles west of Invermoriston. There are parking areas at the dam (at the easternmost point of the loch), at Lundie, halfway along the Northern side of the loch, and at the Cluanie Inn.

There are also several large lay-bys on the A87, including the Loch Cluanie Viewpoint, which is really just a lay-by overlooking the loch shore, with views south to Cluanie Lodge on the south bank.

Of most interest to visitors is the car park at Cluanue Inn, which gives access to popular walking trails. One of the easier trails leads to Loch a' Mhaoil Dhisnich, a lochan on a plateau set below the summit of Druim Shionnach. A much longer trail starts on the private road leading to Cluanie Lodge before branching south, over the hills to Loch Loyne.

Nearby accommodation is calculated 'as the crow flies' from Loch Cluanie. 'Nearest' may involve a long drive up and down glens or, if you are near the coast, may include a ferry ride! Please check the property map to make sure the location is right for you.

More self catering near Loch Cluanie

Self Catering near Invergarry