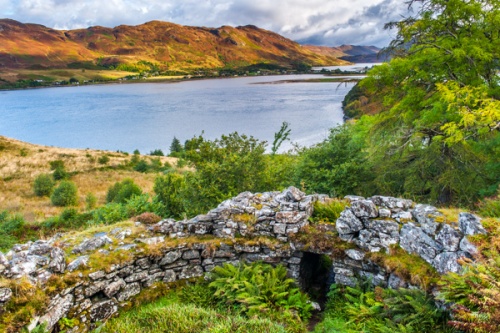 Totaig Broch stands in a commanding position on a sloping hillside above Loch Alsh, with idyllic views towards Ardelve and Nostie on the far shore. The broch has never been restored as, for example, at nearby Dun Telve, and is overgrown with bracken during the summer months. On the other hand, the fact that it has never been restored means that you can appreciate the broch construction in its original state. 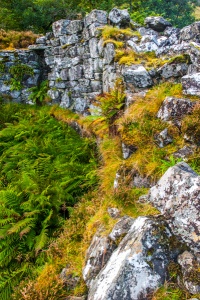 Inside the broch wall

The broch sits beside a small stream. Presumably, the stream was the reason the broch was built in this spot, though the location is on a relatively steep slope, rising 5 feet from one side of the central court to the other.

This sloping surface meant that the builders had to be creative to make the scarcement (the ledge for interior walling) level. The broch was investigated in 1889 and again in 1924, but very few finds were unearthed beyond a stone cup made of steatite and half of a quern stone for grinding grain.

The entrance is at the lowest point of the slope, facing north-east. The entrance passage is intact, and the opening is topped with a triangular lintel stone. You can pass through the opening to the interior, but for a better view you can (carefully) climb onto the uphill walls and look down into the circular interior. You can clearly see the mural passage that ran through the thickness of the double-skinned walls, and make out the ruinous stairs that gave access to long-vanished upper chambers. 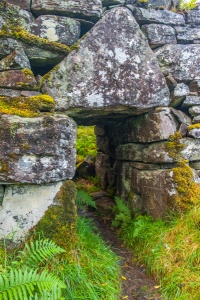 The name Caisteal Grugaig refers to legends of a local witch named Grugaig. The witch had two sons, named Telve and Todder. The twin brochs in Glenelg are named Telve and Troddan, from the same tale.

According to RCAHMS (Royal Commission on the Ancient and Historic Monuments of Scotland), the broch dates to the late 1st millennium BC. You can clearly see the remains of a guard chamber off the left side of the entrance passage.

This chamber measures about 14 feet long and 5 feet wide, and was topped by a beehive dome, very little of which remains. On one side of the broch interior is a mural cell, with a stone cupboard, or aumbry, built into the wall. Beside this cell is the entrance to the mural stair, where 5 steps lead to a landing. Very little remains of the first-floor gallery, and even less of the original Level 2 and 3 galleries.

Getting to Totaig Broch is half the fun; it's a superb walk and not at all strenuous. Take the minor road along the west shore of Loch Duich, through Letterfearn. You can opt to park in Letterfearn and enjoy a 20-minute walk along the loch to Totaig, or continue to the end of the paved road at Totaig, where Loch Duich joins Loch Alsh, and park in a layby before the gates to the Ferry House at Totaig.

If you drive down the narrow lane to the Ferry House, as I did, you'll find it hard to get out easily! Walk past the Ferry House and take the obvious trail along the shore until you reach a gate in a deer fence. Keep left, following the trail, and you will cross a small burn, over stepping stones.

The broch is above you, on the left, as you climb up from the burn. If the bracken is high, you'll perhaps find the remains underwhelming at first, but as you explore the ruins you'll see that there's a lot more to the broch than it seemed at first glance. The views along the trail from Totaig are simply stunning, and near the start of the walk you can look across Loch Duich and see Eilean Donan Castle on the far shore. 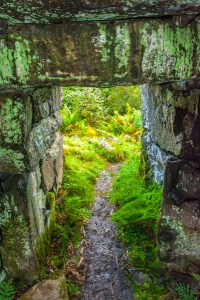 Going through the
entrance passage 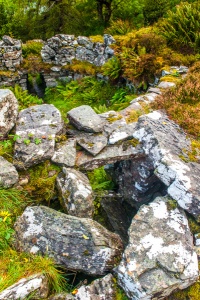 Remains of the
mural passage 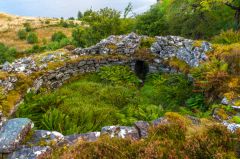 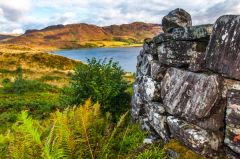 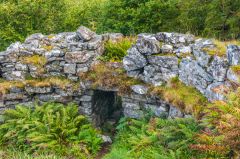 Nearby accommodation is calculated 'as the crow flies' from Totaig Broch. 'Nearest' may involve a long drive up and down glens or, if you are near the coast, may include a ferry ride! Please check the property map to make sure the location is right for you.

More self catering near Totaig Broch