HERITAGE HIGHLIGHTS:   The largest memorial to a writer in the world 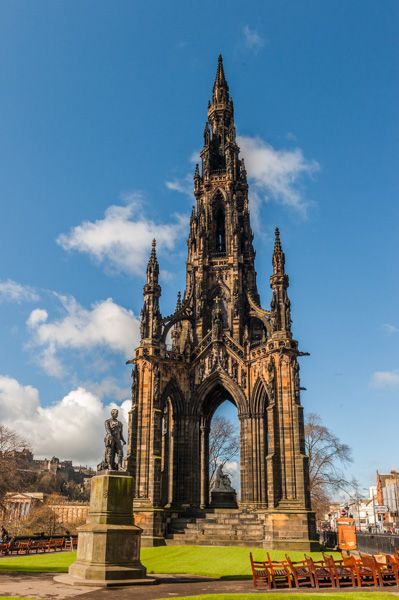 In a public garden on the edge of busy Princes Street stands a striking monument to one of Scotland's best-loved writers, Sir Walter Scott. The Scott Monument is the largest memorial to a writer in the world; a testament to just how popular and important Scott was.

Visitors can climb 287 steps to an observation platform near the top of the monument for superb views over Princes Street Gardens and across to the National Portrait Gallery of Scotland and Edinburgh Castle. 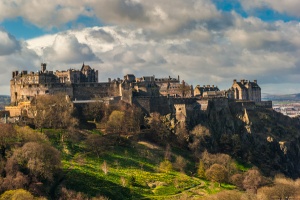 Edinburgh Castle from the Scott Monument

Within the centre of the structure is a small museum room where you can learn more about Scott's life and work.

The Monument was designed by George Meikle Kemp (1795 - 1844), who drew his inspiration from the medieval architecture of Melrose Abbey in the Borders and Rosslyn Chapel, just outside Edinburgh. Kemp was a surprising choice, for he was not an architect but a carpenter. Yet his neo-Gothic design beat out competition from established architects and was selected by a panel of judges. Tragically, Kemp drowned in the Union Canal before the Scott Monument was finished.

The Monument was begun on 15 August 1840 and officially opened exactly 8 years later. The structure was built just as the new science of photography was being invented, and some of the earliest known photographs ever taken show the Monument being built. 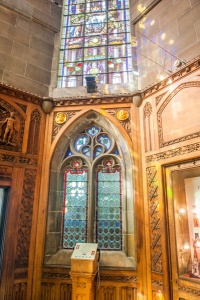 Inside the Scott
exhibition room

The Monument stands just over 200 feet high, and is decorated with carved figures of characters from Scott's novels. There are 4 stages, or platforms, on the climb from the Monument's base to the observation platform.

At the base of the Monument is a statue of Scott with his favourite deerhound Maida, sculpted from Carrara marble by Sir John Steell and set on a platform of huge stone steps. Steell was responsible for several other bronze statues in Edinburgh and established the first bronze foundry in Scotland for creating works of art.

The Monument divided public opinion when it was completed. Author Charles Dickens derided the design, calling it 'like the spire of a Gothic church taken off and stuck in the ground'. Whatever its contemporaries thought, the Scott Monument is now an Edinburgh icon, and one of the most popular destinations for tourists.

I definitely recommend ascending the Monument, though you definitely need to be fit, as the stair are steep and plentiful. They are also too narrow for people to pass, so there can be traffic jams while one group of visitors goes up or down, blocking the way for people going the other direction. Now having said all that, I had a great time! The views from atop the Monument are truly spectacular, and it is worth climbing up just to get a closer look at the carving detail, which is quite exceptional.

Note that because of the museum's height it can very windy at the top (as I can personally attest!), and access may be closed to the stairs at times of high wind. 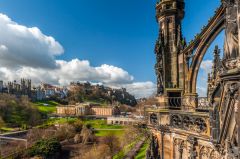 More self catering near Scott Monument