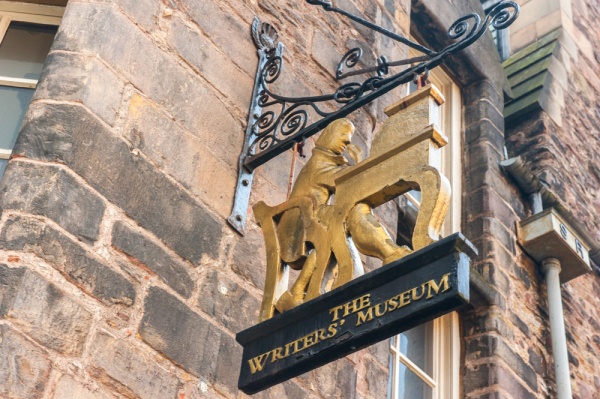 The Writer's Museum is devoted to the lives of three of Scotland's leading literary figures; poet Robert Burns and novelists Sir Walter Scott and Robert Louis Stevenson. The free museum is located in Lady Stair's Close, linked by a narrow passage to Edinburgh's famed Royal Mile.

Within the Close is Makars' Court, where stones inscribed to Scottish writers and poets from the 14th century to the present day are set into the pavement. Makar comes from the old Scottish word for poet, or author. 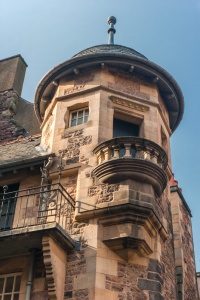 The turret of
Lady Stairs House

The museum is housed in Lady Stairs House, built in 1622 for Sir William Gray of Pittendrum. It was known as Lady Gray's House after Sir William's death. If you look above the museum entrance you will see the initials of Sir William and his wife, nee Gida Smith, and an inscription that reads 'Fear the Lord and depart from Evil'.

In 1719 the house was purchased by Elizabeth, Dowager Countess of Stair, the widow of John Dalrymple, 1st Earl of Stair, and the name was changed. When the building was threatened with demolition in 1895 it was purchased by the 5th Earl of Roseberry, a direct descendent of Sir William Gray. The Earl restored the house and in 1907 he gave it to the City of Edinburgh to serve as a museum.

Among the prized objects is the printing press used to print Scott's Waverley novels. Other Scott memorabilia includes a scale model of the Scott Monument, which stands on Princes Street, and an exhibit on its designer, George Meikle Kemp. 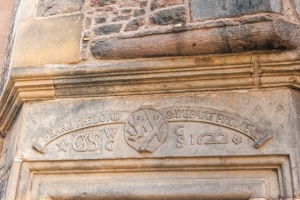 1622 inscription over the door

The museum holds several first editions, including Stevenson's 'A Child's Garden of Verses' and Scott's 'Waverley'. Among the original manuscripts on display is the first draft of Burns' ‘Bruce’s Address to his troops at Bannockburn’, better known as 'Scots wha hae'. Other Burns' memorabilia include personal letters, and a swordcane used when Burns worked as an exciseman (tax collector).

One of the most intriguing objects is a wardrobe made for Stevenson by Deacon Brodie, the man whose very real double-life as a respected cabinet maker and a burglar inspired the classic horror novel 'The Strange Case of Dr Jekyll and Mr Hyde'. Other objects are from his time in Samoa, where he moved with his family in 1890. Among these is a tortoiseshell and silver, given to Stevenson by a local chief and inscribed with the word 'Tusitala', which translates as 'teller of tales'.

None of the 3 writers represented in the museum has a direct connection to the house, though Robert Burns lived in nearby Baxter's Close when he came to Edinburgh in 1786, and all three writers would have been familiar with the city's Old Town.

The Writer's Museum is free to enter. 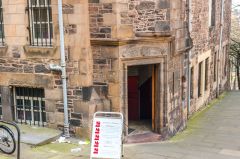 More self catering near Writers' Museum