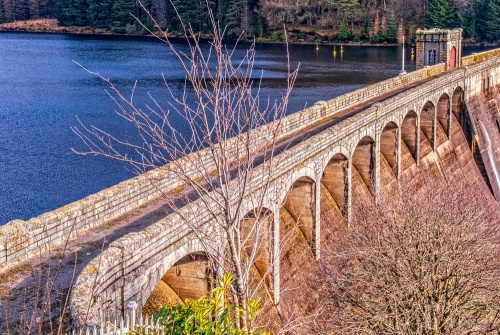 Laggan Dam stretches across the River Spean at the western end of Loch Moy, between Laggan and Roybridge. The striking dam was built in 1934 to harness the power of water flowing out of Loch Laggan to operate the British Aluminium Company's smelter at Inverlochy, just outside of Fort William, about 15 miles away.

Laggan Dam increased the loch's length but not its width, so no neighbouring properties had to be moved. The water level is automatically regulated with syphon valves using a ball-cock and air chamber. When the water reaches a set height it automatically begins to syphon the excess away.

The engineering feat is remarkable; water builds up behind the dam and is then sent by underground tunnels to Loch Treig and then on to the slopes of Ben Nevis before spilling down to the power station at Fort William via five large steel pipes. Excess power is then sold to the National Grid.

The dam is an impressive sight. It is built in a huge curve and made of concrete reinforced by 24 segmental arches and a stone retaining wall resting on a foundation of granite. There is a control pavilion at the centre and at the south end, linked by a roadway over the top of the dam.

The dam was designed by CS Meik & Halcrow (the Halcrow Group) and the main contractor was Balfour Beatty & Company Ltd. It is one of a network of similar dams made to supply power to the smelter.

The Laggan Dam is a gravity dam, designed to resist the force of the water purely by the weight of the dam's material.

The dam marks the boundary of Lochaber and is a Category A listed building. Category A is the highest listing level, marking a building of national or international historical importance.

The dam is impossible to miss. It is on the A86 road between Fort William and Spean Bridge, at the western end of Loch Moy. There is a free parking area and an information panel overlooking the dam. It is worth stopping just to admire the construction, which is extremely dramatic and eye-catching.

Road to the Isles - 16 miles (Countryside)

Nearby accommodation is calculated 'as the crow flies' from Laggan Dam. 'Nearest' may involve a long drive up and down glens or, if you are near the coast, may include a ferry ride! Please check the property map to make sure the location is right for you.

More self catering near Laggan Dam

Self Catering near Spean Bridge