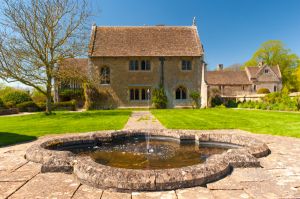 Great Chalfield Manor
Great Chalfield Manor is an idyllic moated medieval manor house, built in the late 15th century and defended by a gatehouse, moat and wall. The house is built around a great hall with beautiful oriel windows, featuring a vaulted porch and an ornate fireplace. Look for the spy-holes high in the walls of the hall.

Without doubt one of the most picturesque and wonderfully preserved medieval manors in England, Great Chalfield sits in magnificent Wiltshire countryside, with green fields running up to the moat the still surrounds most of the site. Beside the manor there is a large gatehouse, barn, and lovely little parish church.

Beside the house is a formal garden area with terraces leading to manicured hedges and topiary, while behind the manor a sloping lawn leads down to quiet stew ponds. The scene is an English idyll, as perfect a picture of a traditional manor house as you would ever wish to see.

The house was begun around 1470 by Thomas Tropnell (or Tropenell), a lawyer and solicitor. Tropenell made his fortune as a steward for the Hungerford family of Corsham, and he is buried in Corsham church. 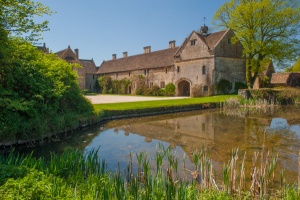 The gatehouse and barn

The house layout is typical of the late medieval period, based around a hall with a courtyard to the rear, where the kitchen and service areas were located. To the front is a pair of wings flanking the hall, punctuated with gables and featuring large oriel windows.

Look up at the gables and you will amusing carvings, one of a dog and monkey, one of a soldier. One of the wings served as a solar, or private family quarters.

The house was in dire condition by the late 19th century, when Robert Fuller stepped in. Fuller was a local businessman, who purchased the house in 1878 and began a comprehensive programme of restoration. He called in architect Harold Brakspear to completely rebuild the solar wing.

So comprehensive was the rebuilding that it is hard to differentiate the Edwardian restoration from the medieval original! The manor was granted to the National Trust in 1943, but the family continued to live here, as they do today. When we visited we were guided around by the owner, a descendant of Robert Fuller, and it was obvious how much pride he took in his family home and its history. 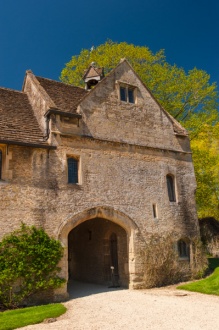 (Note: because Great Chalfield is very much a family home, we weren't allowed to take interior photos, so, unfortunately, all we can share are views of the house exterior and gardens)

The heart of the house is the wonderful great hall, which rises to the roof. There is a minstrel gallery at one end, and though this is typical of the period it is actually an Edwardian addition, as is the sculpted screen beneath it.

High on the walls are grotesque carvings, but they are far more than amusing pieces of art; there are peepholes built into the carvings so that the family members in their private quarters could keep a close eye on what passed in the hall below!

Near the entrance is the original dining room, with a likeness of Tropnell himself on the wall. Look closely and you will see that he is shown with 5 fingers and a thumb, a symbol used to portray greed. Not what you would call a flattering portrait, then!

If this is Tropnell as thought, it is the earliest known portrait of an MP in Britain. The plasterwork ceiling in the dining room is Elizabethan, as is the panelling.

The solar wing is largely Edwardian, though based on the original medieval rooms. The upper chamber is an authentic recreation of the original solar. The oriel window is carefully recreated from Victorian sketches of the original.

The gardens are well worth an extended wander. Most of what we see today is part of the Edwardian restoration, and the result is an Arts and Crafts garden of delight, with two large 'topiary houses', small fountains and avenues, with a lovely garden gazebo looking over the old medieval moat.

The house is only accessible by guided tour, and we were led around by the house owner himself. The sense of history and colourful past clings to every stone and the period rooms - both original and Edwardian restorations - exude charm and a sense of heritage.

The gardens are a delight, from the formal topiary lawn to a quiet suntrap in the courtyard behind the house. I loved the walk around the stew ponds, which gave wonderful views of the manor and gardens. I highly recommend a visit to the tiny church, which has wonderful historic tombs and is usually open during manor opening hours. 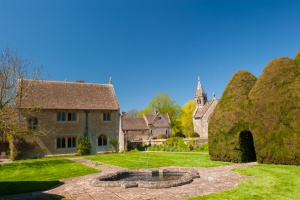 The Arts and Crafts gardens 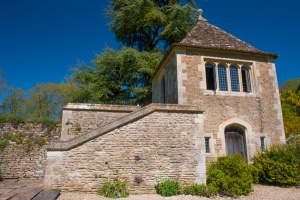 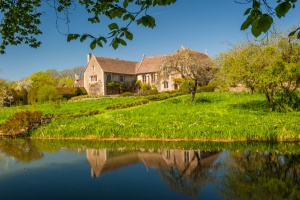 The manor from the stew pond 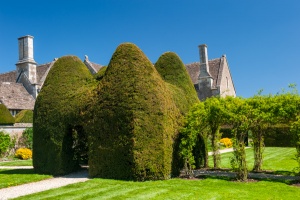 Topiary house in the garden 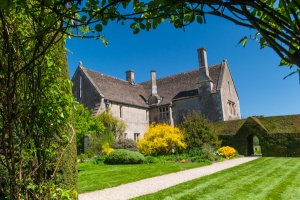 The rear of the manor house 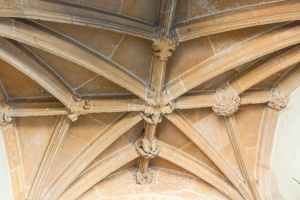 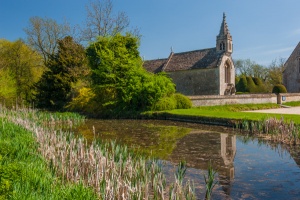 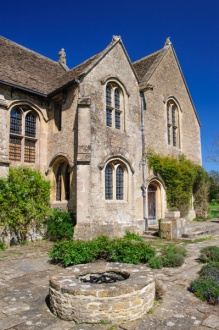 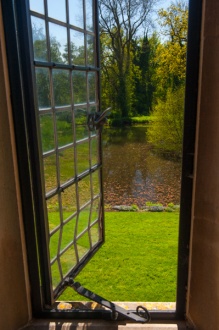 The moat from the
garden gazebo 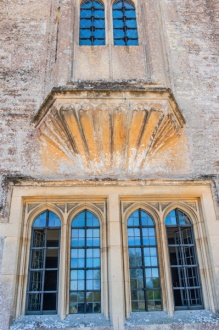