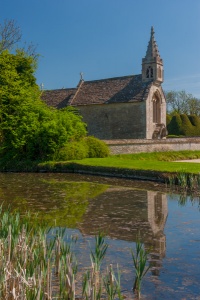 The tiny church of All Saints adjoins the manor house of Great Chalfield. We know a lot about the history of the mano, but there seems to be some uncertainty about the history of the church. We know that there was a chapel here as early as 1316, and by 1349 it had become a fully-fledged parish church. However, the presence of a Norman tub font inside the west door suggests a much earlier foundation of which no trace now remains.

In 1480 Thomas Tropnell bought Great Chalfield Manor and created a family chapel in the church. He also rebuilt the chancel, enlarged the nave, and added a porch and bell-cote at the west end. The bell-cote contains a single bell, cast in 1622.

Beside the west door is a hook for hitching a horse; a nice rustic touch! There were additions in the 18th century, and again in 1914 when the Georgian box pews were removed and turned into panelling for the nave. So today we have a largely 15th-century church with numerous Georgian features. 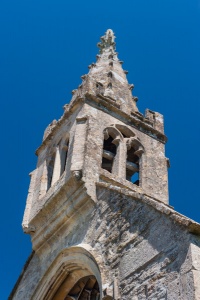 There is a very nice three-decker pulpit by the north nave window, with an attached reading desk and clerk's desk. These were made in 1680 and were the gift of John Hall, the Lord of the Manor. A canopy was added over the pulpit in 1765, and a chapel (now the vestry) on the south side of the chancel was built by the Neale family of Shaw House in 1775.

On either side of the nave door are small 15th-century consecration crosses, and in the centre of the nave is an 18th-century brass chandelier, a gift from the Fullers of Great Chalfield Manor in 1914.

The main interest inside the church, however, is the Tropnell Chapel, separated from the nave by a wonderfully carved 15th century stone screen decorated with 5 coats of arms. These arms trace the heritage of the Tropnell family from the 13th century to the late 15th century.

Inside the chapel, on the west wall, are a series of six 15th century wall paintings, showing in sequence the life and martyrdom of St Katherine of Alexandria. These were covered by whitewash in 1765, as was a painting of a bishop on the east wall, thought to be St Erasmus. Traces of further wall paintings can be seen by the north window. The chapel roof is wagon-vaulted and is original to Tropnell's 1480 construction.

In the chancel are several medieval benches with carved poppyheads.

All Saints is a delightful little church. It is seldom I have seen see so much history packed into such a small space! The combination of the church and the beautiful medieval manor is almost picturesque beyond words. 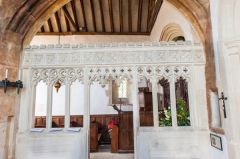 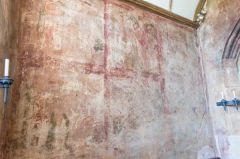 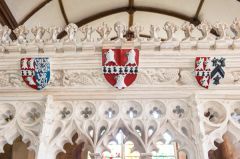 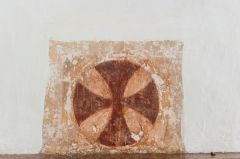 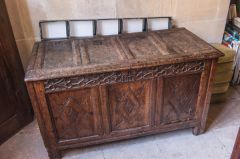 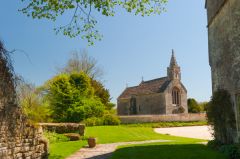 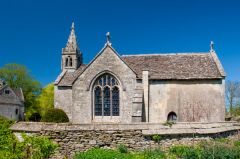 More self catering near Great Chalfield