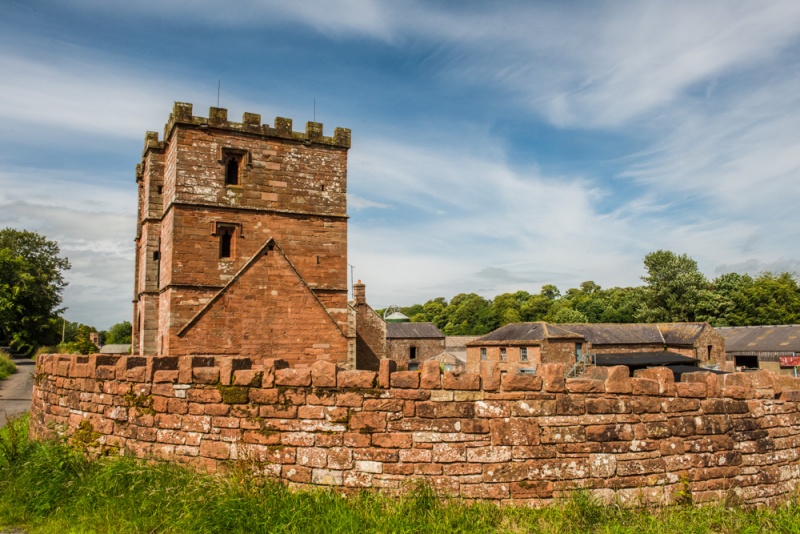 All that remains of a 12th-century Benedictine Priory is a lovely red sandstone 3-storey gatehouse dating from the 15th century. The gatehouse survived the Dissolution of the Monasteries because it was used as the parish vicarage.

To simply call the gatehouse a tower does not tell the whole story. Wetheral's location close to the Scottish border meant it was in constant danger of attack. The battlemented tower more closely resembles a fortified pele rather than a simple priory entrance. Even after the priory had been dissolved by Henry VIII the gatehouse served as a fortified residence for the vicar of Wetheral. The vicar served the church of Holy Trinity & St Constantine, whose striking hexagonal tower can be seen through the trees from the Gatehouse.

At the time of the Norman Conquest, this northern region was controlled by the Scots. In 1092 William II seized what became Cumberland and granted the land to Ranulf Meschin, brother of the powerful Earl of Chester. In the early 12th century Lord Ranulf gave land at Wetheral to St Mary's Abbey in York, and the Abbey founded a priory for the Benedictine order, probably the first monastic foundation in Cumberland.

Wetheral was never more than a small daughter house of St Mary's Abbey, supporting only 12 monks at its height, under the leadership of a prior. Though not large, Wetheral must have been reasonably important locally, as it was able to host Prince Edward, later Edward II, in both 1301 and 1307.

Apart from its religious function, Wetheral was also a place of sanctuary. A series of small stone crosses outlined a sanctuary area, and once within this boundary, criminals were immune from arrest, though they had to solemnise this right by ringing the bells of the parish church and vowing in front of the manor bailiff that they would keep the peace.

Edward III took this right of sanctuary one step further in 1342 when he offered a complete pardon to anyone claiming sanctuary at Wetheral, on the condition that they joined the royal armies to fight against the Scots.

When Wetheral was dissolved in 1538 it supported only 4 monks and a prior. The monastic buildings were left to decay, but the gatehouse continued to be used by the parish vicar as a residence well into the 17th century. After the last vicar moved to more comfortable quarters, the gatehouse was briefly used as a hayloft.

The gatehouse is quite impressive, and you can see where it was originally joined to ranges of buildings on either side. Under the entrance passage is a small chamber for a porter, and a spiral stair leading to chambers on the first and second floors. Each floor consisted of a hall with a garderobe, a fireplace for warmth, and large windows giving a good view of anyone approaching along the road.

I thought the gatehouse was quite impressive, though perhaps not as much as Shap Abbey, further south in Cumbria. It is just a shame that no more of the priory buildings have survived.