HERITAGE HIGHLIGHTS:   The west tower is the best remaining feature 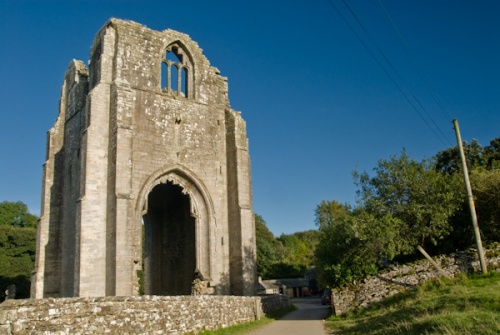 Around 1191 a Premonstratensian abbey was established at Preston Patrick, near the Lancashire border. Sometime around 1200, the canons of Preston Patrick moved north to a new location at Shap, an isolated site on the River Lowther, donated by Thomas, son of Gospatrick. The canons were ordained priests, unlike other monastic orders, and could celebrate mass, so they acted as priests for nearby parishes.

Shap has the distinction of being the last abbey to be dissolved by Henry VIII, seeing its last service in 1540. After the Dissolution, the abbey was sold to Sir Thomas Wharton, and it remained in Wharton hands until 1732 when the then Duke of Wharton had his estates seized for supporting the Jacobite cause.

Shap then passed to the Lowther estate, until 1932 when it came into state care. It is now looked after by English Heritage. Some of the monastic buildings were used to create Shap Abbey Farm, beside the abbey site, but most were left to decay. 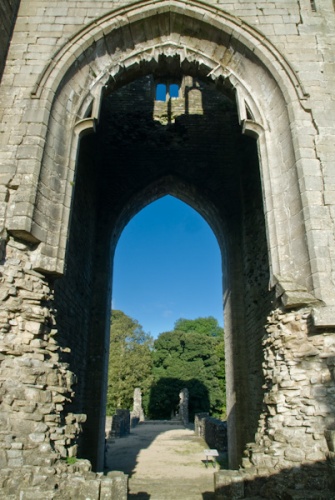 To reach Shap you have to follow an extremely narrow lane that winds across farm fields and dips down a steep incline to a parking area beside the river. You cross a bridge over the river on foot and wend your way along the river to the impressive ruined bell-tower, which acts as a gateway into the abbey site.

The tower seems to loom over the nearby farmhouse like a city skyscraper. The tower is by far the most impressive feature of Shap Abbey; it truly is an imposing building, though I must say that a large, jagged crack like a lightning bolt zig-zagging up the side of the tower made me slightly nervous passing through the wide archway underneath!

To the north of the cloisters is the church, built in the 13th century but lengthened in two centuries later. Look for the circles marked in the pavement of the nave; they mark the stations taken up by the canons after a procession around the buildings on Sundays.

The earliest remain at Shap is the western end of the presbytery, which dates to the late 12th or early 13th century. This was the first part of the church to be built, and was followed by the transepts, crossing, and eastern end of the nave, in that order (so, working from the most holy to the least holy/more functional). 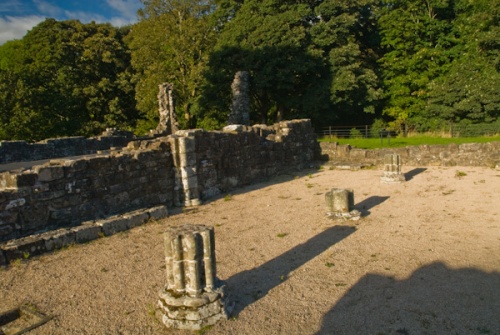 After the church nave was completed the canons moved on to the cloister ranges, followed by an infirmary in the late 13th century. This infirmary now forms part of the neighbouring farm. In the late 15th century the canons extended the presbytery to the east and added a chapel.

Stone from the abbey was used to build Shap Market Hall, and much of the carved stonework was removed for use in Lowther Castle.

Also in the 15th century a central tower was begun, but the weight of the tower put undue strain on the church structure, so the impressive tower was instead built at the west end of the nave.

The tower stands almost to its full height and was possibly built by the same masons responsible for the towers at Furness and Fountains Abbeys. The tower was probably instigated by Richard Redman, one of the most influential of the abbots at Shap.

Redman was the son of a local landowner, who entered holy orders and was selected as abbot of Shap in 1458. In a remarkably long career, he rose to become the head of the Premonstratensian order in England and was eventually appointed Bishop of Ely. He died in 1505.

I absolutely adored visiting Shap; the location is utterly superb, in a lush dell, with the sound of the rushing river accompanied by bird calls the only sound to be heard. You won't find any gift shop here and no ice cream vans. Nor any w.c's I should add. But its better that way; you can imagine yourself for a moment back in the medieval period, without some of the distractions of modern life. Shap really is one of the most beautifully situated monastic sites in England.

More self catering near Shap Abbey

Self Catering near Shap