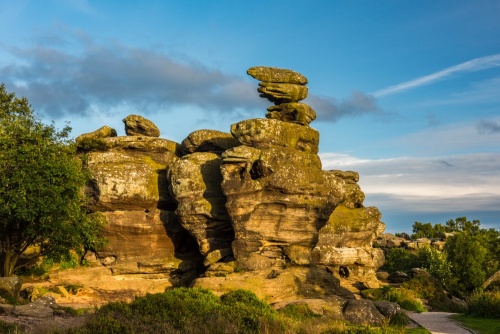 Brimham Rocks are a peculiar set of rock formations composed of millstone grit that has been shaped by wind and weather over the course of centuries into strange shapes. The rocks have been given such intriguing names as Baboon Rock, the Dancing Bear, and the Duke's Nose.

The rocks are up to 30 metres high and are really quite striking to view up close; the peculiar formations look almost otherworldly and somewhat eerie viewed in the mist. It comes as no surprise then that centuries ago local people thought that the formations were carved by druids.

The truth is much less romantic but equally fascinating. The rocks are about 320 million years old and were created when a large river originating in Norway washed sand and grit into a huge delta that covered what is now Yorkshire.

The rock shapes began forming about 73,000 BC, during the last ice age. When the glaciers retreated the melting ice caused ripples in the rock surface and gradually sculpted the solid rock into peculiar shapes. Rain and wind eroded the rocks further to create the bizarre formations we see today.

The rocks are composed of a combination of sand, grit, quartz and feldspar. This combination became known as millstone grit because it was often used to make millstones for watermills.

The Brimham site is part of the Nidderdale Area of Outstanding Natural Beauty, and there are wonderful views over the surrounding moorland in fine weather. The site covers over 300 acres.

The most striking stone is Idol Rock, a 200-ton behemoth which is balanced upon a slender point only 12 inches across. It is hard to see how it is still upright! The most striking formations have fanciful names based on their shape. Near the main path is the Devil's Anvil, that looks like, well, an anvil.

On the cliffs that run along the west side of the site is Lover's Leap, where a pair of star-crossed lovers tried to jump to their deaths but were miraculously saved from death. Another formation is known as the Old Woman and her Consort; it is composed of a very broad and stumpy formation beside a slender little pillar. We'll let you work out for yourself which is the Old Woman and which is the Consort!

If you enjoy a scramble amongst rock formations - or if you have children along - you'll love exploring the peculiar shapes.

Brimham Rocks are situated in a lonely setting atop Brimham Moor, at a height of 300 metres, near the village of Sawley. There is a National Trust pay and display parking area (free to members), and the site is open from dawn until dusk at no charge.

There is a brisk walk uphill to reach the rocks themselves, but the attractive woodland path is quite enjoyable. The path emerges at the summit of the hill overlooking Brimham Moor, with panoramic views to the south and east. There are a visitor centre and toilets near the stones.

I was fortunate enough to spend a week just a few miles away at Burnt Yates, and found myself gravitating to Brimham Rocks every evening. There is something so compelling about the strange shapes and the landscape of the area. 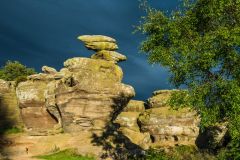 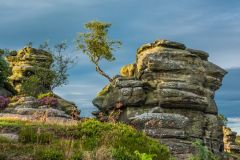 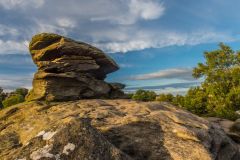 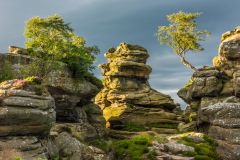 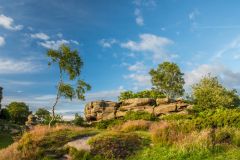 More self catering near Brimham Rocks >>