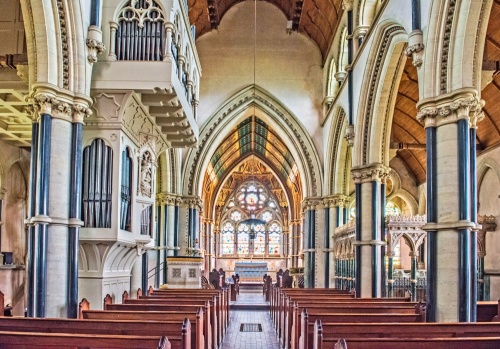 St Mary's is a gem of a Victorian church designed by William Burges in the 1870s. Burges created a flamboyant scheme of decoration that is very much 'High Church', with sumptuous marble, stained glass, and gilding throughout.

St Mary's Church was commissioned in 1870 by the Earl and Countess de Grey and Ripon (named the Marquess and Marchioness of Ripon in 1871). It was meant to replace the existing parish church of St Lawrence in Aldfield village. In a curious twist, the process was reversed in 1969 when St Lawrence was made the parish church once more and St Mary's was made redundant.

Since being declared redundant St Mary's has been cared for by English Heritage. Though it is redundant it is still a consecrated building and is used for four services annually, plus periodic weddings, baptisms, and funerals.

The Earl and Countess of Ripon owned the neighbouring Fountains Abbey and Studley Royal estates, which were joined together as one vast estate in 1767, combining the ruins of medieval Fountains Abbey with the superb 18th-century landscape water gardens of Studley Royal.

In 1870 a family tragedy prompted Lord and Lady Ripon to establish not one but two richly decorative churches in Victorian Gothic style. In that year Frederick Vyner, son of Lady Ripon's sister Lady Mary Vyner of Newby Hall, was kidnapped by bandits while on a Grand Tour in Greece.

The family quickly gathered ransom money but the ransom exchange went badly wrong and Frederick Vyner was killed. Lady Vyner used the ransom money to endow a new church at Skelton-cum-Newby, in the grounds of Newby Hall in honour of her son. She asked Lord Ripon to act as co-patron of the new church. This he did, but he and Lady Ripon also used a share of the ransom money for a new church on their own estate. 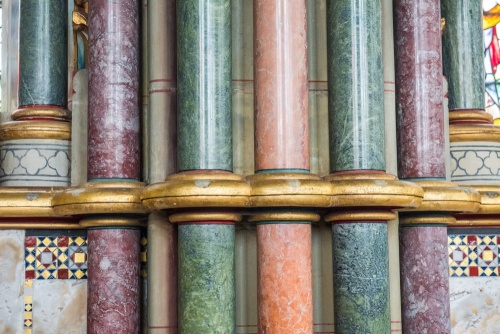 Multi-coloured marble in the chancel

They wanted the new church oriented to align with the main estate drive and with Ripon Cathedral, some 3 miles distant. An earthen platform was created to raise the ground and the churchyard boundary wall set into a ditch like a ha-ha surrounding a stately home, all in order to provide an unobstructed view of the church.

Tradition says that the original cost estimate for St Mary's was £15,000 but the actual final reckoning came to over £50,000. When you see the incredibly ornate decoration it is easy to see how costs ran so high. Richly polished stone columns line the chancel, ornate mosaics decorate the floor, and vivid stained glass panels glow with light.

To walk into the church interior is to enter a stunning rainbow of colour, of carved and polished stone and wood, of elaborate ironwork and magnificent carvings. The design for Studley Royal is a masterpiece by William Burges, one of the foremost architects of the late Victorian period.

Burges (1827-1881) was the son of a marine engineer who rose to become one of the leading architects of the late Victorian period, specialising in Gothic Revival style. His major works were the remodelling and decoration of Castell Coch and Cardiff Castle, both undertaken for the 3rd Marquess of Bute. Another of his best works survives at Knightshayes Court in Devon.

Burges was probably chosen for the new churches at Studley Royal and Skelton-cum-Newby because of his work with Lord Bute, a family friend of Lord and Lady Ripon. Lord Bute had also been an undergraduate at Oxford with Frederick Vyner. It seems highly likely that Lord Bute recommended Burges to Lord and Lady Ripon.

At Studley Royal Burges created a four-bay design with clerestory aisles, and a west tower rising in two stages to a pinnacled spire. These, plus the south porch and chancel, are all in a gloriously ornate Early English style.

Most of the interior decoration is focused on the chancel, leaving the nave and aisles strangely plain by comparison. The theme throughout is 'Paradise Lost and Paradise Regained'. Burges combined 13th-century Early English Gothic style with Italian and French motifs to create a symphony of colourful materials, mosaics, multi-coloured marbles, painting, metalwork, and stained glass.

Construction was supervised by J Thomas, a clerk of the works. Burges seems to have been at odds with Thomas over costs, as they had to go to arbitration in 1877. 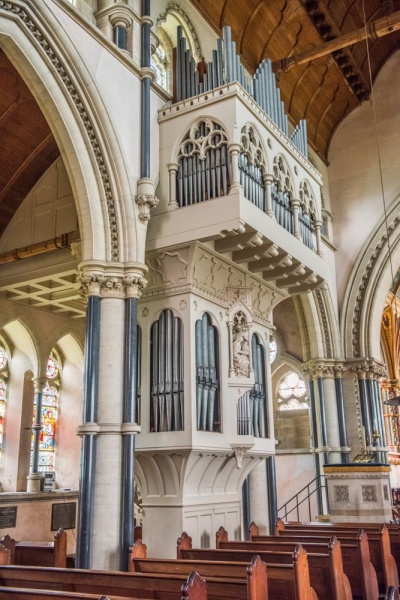 Lord and Lady Ripon wanted St Mary's to be more than a church; they wanted to found a church with an active musical and religious focus. They commissioned Burges to build a house for an organist and music master beside the church. When it was finished in 1873 the house was known as The Choristers' House, which suggests that it was meant to support a choir school. If so, that ambition never materialised.

If ever there was a Victorian Gothic church that deserved the name 'High Church', this is it. St Mary's is about as close to a traditional Catholic church as you will see in England without actually being Catholic. It certainly reflected Earl Ripon's personal views, for the Earl controversially converted to Catholicism in 1874, before St Mary's was finished.

Despite his conversion, he is buried in the family vault at the east end of the south aisle. He and Lady Ripon (d. 1907) are commemorated with marble effigies over the vault. After his conversion, the task of finishing St Mary's fell to Lady Ripon, who remained an Anglican.

It seems likely that Lady Ripon had a hand in the design of St Mary's from the start. One story says that she handed Burges her own T-square and drawing-board so that he could lay out a design for the church on the spot, under her eye. If the church was indeed designed 'on-the-spot' it is an extraordinary achievement.

Made of Tennessee marble given to Lord Ripon while on a trip to America in 1871. The design is by William Burges, with alternate sides of the octagonal font decorated with bronze figures by Thomas Nicholls.

The floor of the nave and south porch are covered with decorative encaustic tiles. Interestingly, six of the tiles are mislaid, probably on purpose. Encaustic tiles were popular in the medieval period and the style was very popular in Victorian Gothic architecture.

The window is a mixture of themes surrounding the life of the Virgin Mary. In front of the window is a carved screen representing the Biblical Tree of Jesse, a symbolic family tree of Christ, with the figure of Jesse lying at the bottom. The nave windows represent Biblical scenes from both the New and Old Testaments. The windows were all designed by Burges and made by Saunders and Company of London.

You notice the extraordinary organ case as soon as you enter the church. The case was made by John Walden to a Burges design. The organ retains its original pipes and a hand pump (though now an electric pump is used). A spiral stair leads to the organ loft in the north aisle, where the organist had a very poor view of the minister.

In the chancel is this beautiful door given by William Burges to the church. It is carved with scenes of the Virgin and Child based on medieval iconography. Look for the gifts of the Three Magi at Mary's feet. 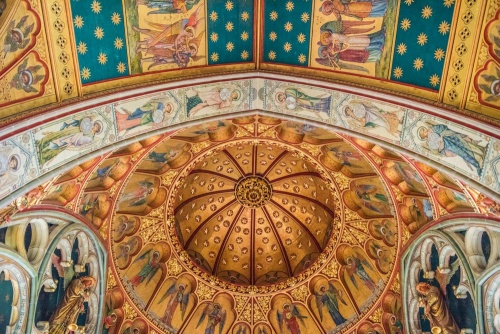 The 'Roof of Heaven'

The Roof of Heaven

The exceptionally rich sanctuary dome is decorated with a scene depicting the end times, with a starry sky supported by seven angels with trumpets. Below the angels are angel musicians and below them are boys carrying palms, probably representing the male children killed by Herod.

These are just a few of the highlights, but it is very hard to pick just a few; the interior of St Mary's is a tour-de-force, and extraordinary Victorian Gothic vision.

Though St Mary's is maintained by English Heritage its opening times are managed by the National Trust, who also look after the Fountains Abbey and Studley Royal opening arrangements. The church is open on days when the estate is open, though as we discovered to our cost it does not open at the same time as the main visitor centre. There is a very nice walk to the church from the main visitor car park and another signposted from the Studley Royal parking area at the far end of the water gardens. 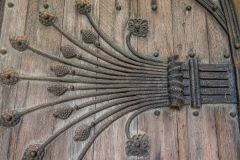 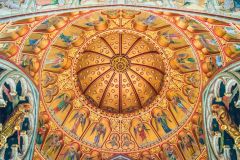 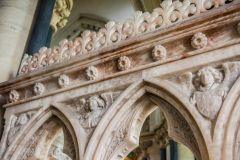 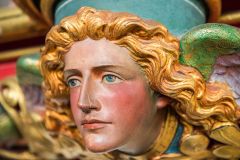 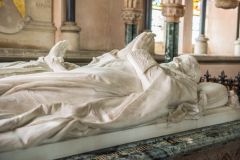 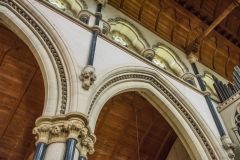