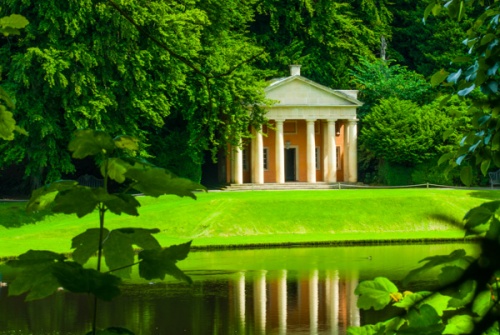 Studley Royal Water Gardens
In 1722 John Aislabie retired to his estates at Studley Royal, near Ripon, after the South Sea Bubble scandal erupted during his tenure as Chancellor of the Exchequer. For the next 20 years, he worked to create the best water garden in England, perhaps in Europe. Lakes, grottoes, canals, and cascades join with classical temples and the ruins of medieval Fountains Abbey to provide an unforgettable landscape.

John Aislabie (1670-1742) inherited the Studley Royal estate in 1693 at the age of 23. He was just about to launch a political career that would see him rise to the very top and plummet just as quickly to the very bottom.

Aislabie's father George had 'married money' by wedding Mary Mallory, the daughter of Sir John Mallory of Studley Royal. John studied at Cambridge University and was elected MP for Ripon in 1695. He rose to become a Lord of the Admiralty in 1710 and Treasurer of the Navy in 1714. In 1718 he was named Chancellor of the Exchequer.

He resigned his post as Exchequer in 1721 and was imprisoned in the Tower of London for 'dangerous and infamous corruption'. He did not stay long in the Tower, and after his release, he retired from public life and returned to Yorkshire where he devoted his time to creating one of Britain's great gardens on his family estate at Studley Royal. 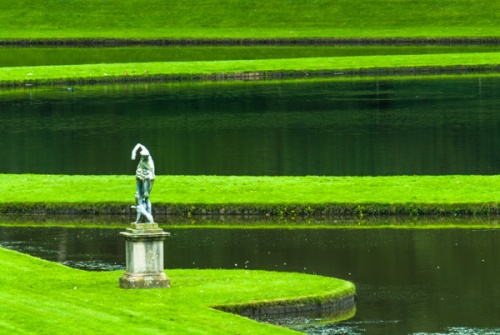 A statue beside the canals

The roots of Studley Royal Water Gardens go back a few years before Aislabie was forced from political office. He began transforming Studley Royal around 1716, introducing a new, natural form of landscape gardening at odds with the 17th-century reliance on rigidly formal designs.

Aislabie wanted to create, not a garden, but a picturesque landscape that would impress his visitors. He used the entire wooded valley of the River Skell as a vast canvas to create a water garden on a huge scale, incorporating the natural landscape features of the valley into a carefully designed landscape garden and arranging garden features at strategic locations around the valley.

John Aislabie and his son William created a landscape designed to offer viewpoints and vistas centred on carefully placed objects such as classical statues and garden follies that acted as focal points. In 1767 William Aislabie bought the neighbouring ruins of Fountains Abbey and made them a part of the garden landscape. The medieval ruins acted as the ultimate 'eye-catcher', a distant picturesque crumbling ruin to draw the viewer's gaze. 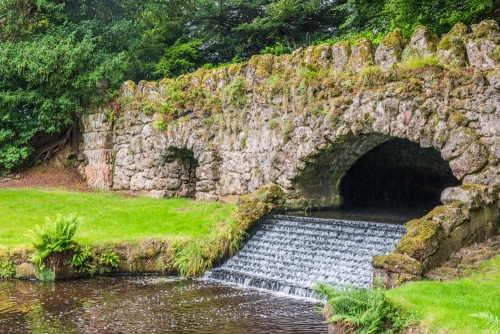 Garden features include Anne Boleyn's Seat (sometimes called 'Surprise View'). The neo-classical garden seat offers a sudden and dramatic view down the valley to the abbey ruins. On the valley bottom is a long canal flanked by grassy banks. The canal runs into a semi-circular lake called Half Moon Pond, a completely circular lake called, not surprisingly, Moon Pond, and a triangular lake known as Crescent Pond.

Beside these waterways are a variety of carefully arranged sculptures, designed to draw the viewer's eye. The wooded valley rises up to the High Ride, a broad track leading to a Gothic folly known as the Temple of Fame (c. 1770). High on the west side of the valley are the Octagon Tower (c. 1735) and the Banqueting Hall (c. 1728).

Another feature is How Hill Tower, a folly in the style of Sir John Vanbrugh. It is entirely possible that Vanbrugh, the architect of Castle Howard, influenced Aislabie's tower, for the men met during Aislabie's political career.

The water garden as we see it today is much as it was when William Aislabie died in 1781. 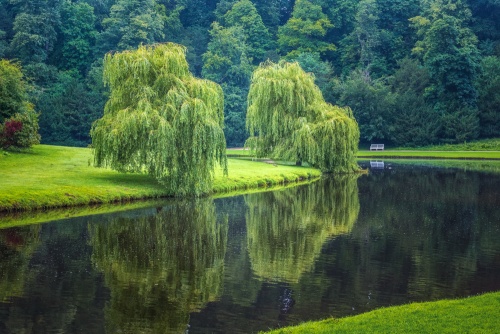 Just outside the water garden is the ancient deer park, home to over 600 deer. Also part of the Studley Royal Estate, is the historic church of St Mary's, Studley Royal (English Heritage), a lushly decorated Victorian church.

The abbey and water gardens can be visited on a combined admission.

Be warned: Fountains Abbey and Studley Royal is a very popular destination, and may be crowded, particularly during the summer months.