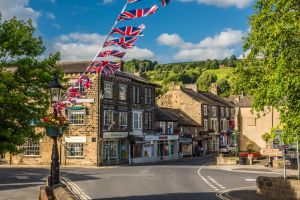 Pateley Bridge is an attractive market town in Nidderdale, in the northern Yorkshire Dales. The Nidderdale Museum, located in a former workhouse, tells the story of Pateley Bridge's history as a centre for lead mining. The town is also home to a popular annual agricultural show called the Nidderdale Festival.

The first written record of a settlement here on the bank of the River Nidd comes from 1175. The origin of the name is unclear, but it may refer to a clearing, or a shallow place by a ford. An old tradition suggests that 'Pateley' comes from the Yorkshire expression for a badger, but this notion has been discredited. We are on safer ground with the medieval history of the town, for we know that it gained the right to hold a weekly market in 1320.

Situated on the High Street is 'The Oldest Sweet Shop in England'. The shop was established in 1827, but it is housed in a building that dates back to the 1660s. The shop sells traditional confectionery, made according to the original 19th-century recipes and boiled in copper pans. They proudly claim that their tasty confections are made 'the way sweets should be made'.

If you enjoy outdoor pursuits Pateley Bridge is perfectly located for a walking holiday, with both the Six Dales Way and Nidderdale Way long distance paths passing through the town. 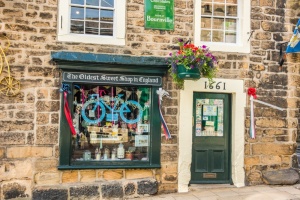 The Oldest Sweet Shop in England, 1661

Known locally as 'the church in the Dale', St Cuthberts dates to the Victorian period. It was built to replace the medieval church of St Mary's, the ruins of which can still be seen on Old Church Lane, overlooking the town. The new church boasts colourful 19th-century stained glass, and a Victorian organ made by the well known Harrison and Harrison company.

As for St Mary's, it was built in the 13th century, and rebuilt in the 17th century. In the graveyard is a memorial to Mary Myers of Northwoods, who apparently died in 1743 at the ripe old age of 120.

Outside the town is How Stean Gorge, a limestone cleft known as 'Little Switzerland'. Another fascinating geological formation is Brimham Rocks, an otherworldly collection of balancing rocks standing on a high point of Brimham Moor. In Bewerley is Grange Chapel, built in the late 15th or early 16th century by the Abbot of Fountains Abbey. 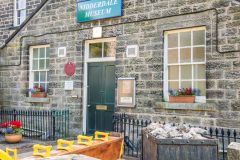 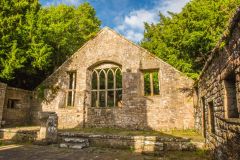 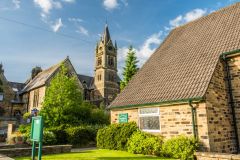 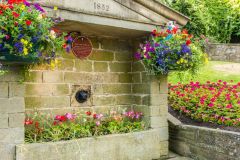 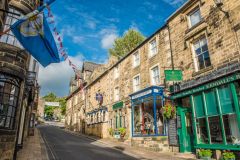 More self catering near Pateley Bridge >>