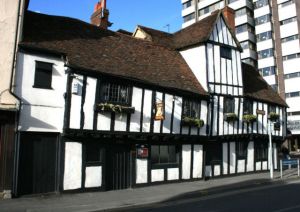 Ye Olde Thirsty Pig in Maidstone
A popular town on the River Medway in north-east Kent, Maidstone is an administrative centre and the foremost market town in the county. The remains of a 14th-century archbishop's palace built by the Archbishops of Canterbury stand beside the parish church. The remains of the palace banqueting hall still stand.

The old palace stables now house the Tyrwhitt-Drake Museum of Carriages. Maidstone Museum displays finds of local archaeology - and there are a lot, for the area was heavily settled by the Romans. There are also iguanodon bones, for that dinosaur was first discovered near Maidstone in the Victorian period.

On Earl Street is the home of Andrew Broughton, former Mayor of Maidstone and Clerk to the High Court of Justice in London. It was Broughton who read out the death sentence of Charles I.

We have mentioned the parish church of St Nicholas. This is a late 14th-century building erected by Archbishop Courtenay. It has been called the finest Perpendicular church in England - a bold claim, but perhaps justified. The heavy buttresses supporting the tower give it the air of a castle.

And speaking of castles, one of the most romantic English castles stands at Leeds, just 5 miles away. This is a lovely 12th-century former royal fortress on an island in a lake.

More self catering near Maidstone >>

More bed and breakfasts near Maidstone >>