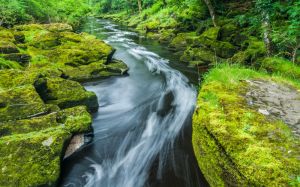 The Strid is a stretch of narrow chasms on the River Wharfe, north of Bolton Abbey. The Wharfe is generally wide and slow-moving, but here it narrows to create a series of chasms and swift rushing water. The Strid was formed by the movement of small stones against the soft underlying rock, creating potholes which then joined together the create the chasms.

Evidence of circular potholes can still be seen on the top surface of the riverside rocks.

The name Strid is said to come from the two banks of the river being a 'stride' apart. They may be, but only if your stride is extremely long!

The Strid lies within Strid Wood, a Site of Special Scientific Interest. Strid Wood is what is known as acidic oak woodland, and is a lovely place to see bluebells in Spring. Colour coded nature trails run throughout Strid Wood, and a rail can be taken along the Wharf to the ruins of Bolton Abbey priory.

An old story says that nearby Bolton Priory (generally called Bolton Abbey) was founded by Lady Alice de Rumilly in remorse after her son and heir, the Boy of Egremont, was killed after falling into the Strid. It sounds good, but the fact that the son's name appears on the deed granting Augustinian monks the land to build the priory rather puts the damper on the tale!

Nearest Accommodation to The Strid:

More self catering near The Strid >>

More Hotels near The Strid >>

More bed and breakfasts near The Strid >>