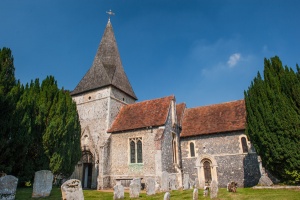 The village of Patrixbourne lies on the route of the Pilgrims Way, the trail that led untold thousands of weary medieval feet towards Canterbury Cathedral and the shrine of Thomas Becket. But the village long predates the arrival of the pilgrims; at the time of the Domesday Book in 1086 there was a church and four mills in the village, then called 'Born'. The manor was in the hands of a Norman lord called Richard Patric, whose family came from the Calvados region of France.

The Patric family, whose name eventually merged with the Saxon 'Born' to create the present village name, replaced the simple Saxon church around 1170 with a new double-aisled building.

They did not stint on their new church, which is richly carved, particularly around the superb south doorway and the priest's door in the chancel wall. The east end was decorated with a large wheel window and further decorative carving.

The similarities between the carvings at Patrixbourne and the celebrated church at nearby Barfreston are marked, and it seems quite likely that the same team of masons worked on both churches, perhaps trying out ideas on Patrixbourne that were later refined and polished at Barfreston. The stone used is from Caen, in Normandy, which was highly prized by Norman masons. 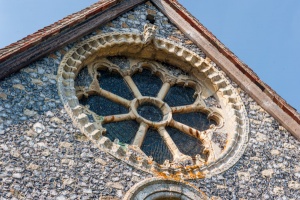 The tower is unusual in that it is not at the west end, but in the south-west corner, and a narrow south aisle springs directly of it. The main south door is set into the tower wall, not into the nave, suggesting that the Norman plan incorporates part of the earlier Saxon layout.

The most impressive south doorway is the most impressive feature of the church, with a triangular string course in the shape of a gable containing a round-headed opening with five orders of voussoir moulding (voussoir being the individual stone sections of an arch). 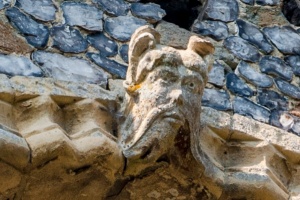 Carved head above the wheel window
(note the flowing moustache!)

Above the doorway opening is a tympanum depicting Christ in Majesty, surrounded by a bewildering variety of carved animals, foliage, birds, human figures, and mythical apocalyptic creatures. Among the figures you can make out are a double gryphon, a Green Man, a tortoise, doves, and quite a few figures that simply defy description! There is obvious damage to the tympanum, probably inflicted by Cromwell's soldiers in 1641, when a large Parliamentarian army attacked the Bishop's Palace at Bekesbourne.

The large wheel window in the east wall is similar to that at Barfreston and shows the wheel spokes being devoured by monsters. Above the wheel is a small figure of a man's head, his moustache flowing to both sides to form zig-zag moulding.

By contrast, the priest's door looks almost restrained, with 4 moulded orders surmounted by a niche containing a carved figure. Tradition suggests that the figure is that of Thomas Becket. There is no way to determine if this is true, but it makes sense given the location of the church on the Pilgrim's Way. 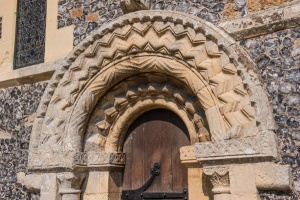 Though most of the interest at Patrixbourne is rightly devoted to the external carvings, the interior of the church has plenty of historic detail. The south nave arcade is 15th century, while the north arcade dates to 1824 when the north aisle was built.

Curiously, there is a blocked Norman doorway in the north wall (best seen from outside). Since the aisle was only built in 1824 this suggests that the door was moved here from somewhere else.

Though the chancel was heavily restored in the Victorian period the windows are all original, including the distinctive wheel window. There are lovely 16th and 17th century Flemish and Swiss enamelled glass panels in the three-light east windows and the Bifron Chapel. These panels were a gift of Elizabeth, Marchioness Coynyngham, in 1837 and who probably purchased them at antique fairs in London and Europe.

The panels depict both religious and secular scenes, including themes as diverse as St John the Baptist, alpine landscapes, and standard-bearers guiding packhorses over the St Gotthard Pass. There are classical figures including Thisbe and Pyramus, familiar from Shakespeare's A Midsummer Nights Dream. The panels are beautifully crafted in Renaissance and Baroque styles, with unusual colours. 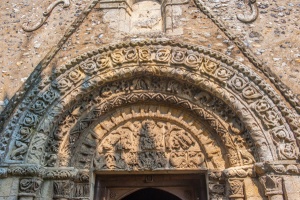 Set into the south wall is a tomb recess with an unusual canopy with mock tracery resembling a scallop shell. There are Victorian floor tiles decorated with the Coynyngham (Cunningham) family crest and the motto 'Over, Fork Over'.

There are several intriguing and frankly rather unlikely stories for the origin of the motto. One fanciful version suggests that when Macbeth of Shakespeare fame killed King Duncan, Duncan's son and heir, Malcolm Canmore, fled and hid in a pile of hay. The farmer called for help, telling his son and farmworkers to 'over, fork over', and pile more straw on top of the fugitive. When Malcolm came to the throne after Macbeth's death 17 years later, he rewarded the farmer's son with the Thanedome of Cunninghame, and arms in the shape of a hayfork.

It will come as no surprise to anyone who has visited Patrixbourne that St Mary's is listed on the excellent website 'Great English Churches' and in Simon Jenkins' popular tome, 'England's Thousand Best Churches'. Jenkins only rates St Mary's church worthy of two stars, which I think is uncharitable, but let's not quibble over a star or two.

The point is that Patrixbourne's parish church is a delight, and one of the most enjoyable Norman churches in the south-east. Not perhaps as exquisitely detailed as nearby Barfreston, but then, very few churches in England are the equal of Barfreston, so that's a bit unfair as well! Suffice it to say that if you enjoy Norman architecture or simply historic churches in general, you will find Patrixbourne an experience to treasure. 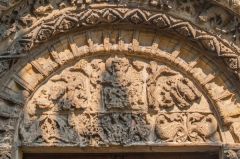 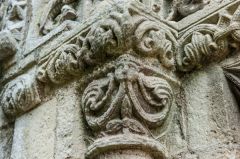 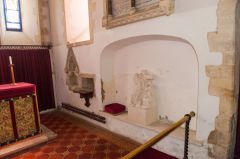 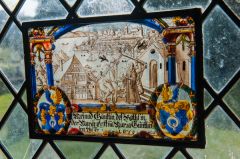 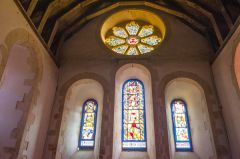 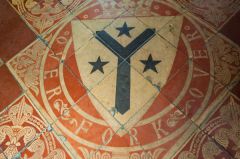 More self catering near Patrixbourne

More bed and breakfasts near Patrixbourne