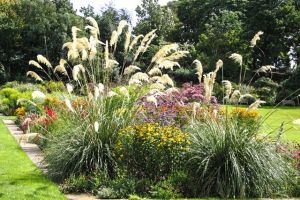 Ness Botanic Gardens
The botanic gardens of the University of Liverpool, sheltered by a belt of Lombardy poplars, oaks, and scotch pines from the winds of the Irish Sea, allowing year round interest.

The gardens stretch over 64 acres, along the banks of the River Dee. They were begun by a successful cotton merchant named Arthur Bulley in 1898 and given by Bulley's daughter to the University after his death on condition that they remain open to visitors.

Arthur Bulley was keen to promote Chinese and Himalayan plants into Britain, and sponsored several voyages by plant collectors to the Far East. Among species introduced into Britain through Bulley's efforts include varieties of gentian, rhododendron, camellia, and formosa.

The original garden designed by Bulley was compartmentalised, with different 'rooms' separated by hawthorn hedges to protect against rabbits. Over the course of several decades the hedges were gradually removed, allowing the plants to thrive in a more natural environment.

Ness is not simply a public garden, but an active centre of horticultural research, conservation, and education, with a focus on teaching children about plants.

Among the garden areas to explore is a heather garden, wildflower meadows and wilderness areas, an azalea walk, pine woods, herbaceous borders, water gardens, a turf maze, and a rock garden.

Best in: all year.