Self Catering in Cumbria - Roa Island 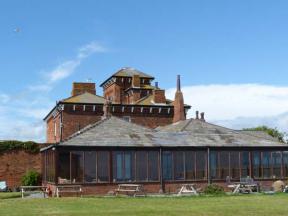 This large detached property is situated on Roa Island, six miles from Ulverston in the Lake District and sleeps upto sixteen people in seven bedrooms.

Outside, this cottage has off road parking for eight cars and lawned grounds with hot tub, furniture and BBQ. Roa Island House is perfect for a special occasion with family and friends at any time of year.

Overall more than expected
Having read the reviews before staying in this house we were very sceptical about what we may find. Overall we must admit there isn?t a great deal to complain about. It is a very good space for large groups gorgeous well kept outdoor areas too. Plenty of space for parking and a lovely cafe (bosuns locker) selling tasty food on your doorstep. Admittedly some of the rooms could do with a bit of redecoration but we?d fairly say that odd scuff marks on walls etc should be expected in a house of this size to be fair. As for cleanliness we had no issues 10/10 all round and found it helpful to have a 24hour call out number to use for any issues we found. (Fortunately we did not have to ring but was nice to know it was there should we need it) Some of the mattresses were uncomfortable but we?d say that overall for us the good points far outweighed any bad! Would recommend and certainly book again.
flipfloptraveller81
2019-11-03

Unmaintained drains, mice and rather pricey !
As a large multi-family group we found the very large house somewhat dated and requiring a more usable kitchen space for large groups. Double beds really have been squeezed into some of the rooms. Great location but cleanliness and broken and poorly maintained features let it down. Sykes cottages resolved drain eventually but the mice are probably a longer term problem related to the size/age or property, and the apparent inability of cleaning team to get to grips with the property between rentals. Lost possessions of previous renters were found under beds, etc, in the dust... A rather scathing review was (understandably) provided to Sykes but over 2 weeks later that commentary does not appear to have made it to their website. Cannot fault the location for interest, visit to the pub on Piel Island is a must. However, our view is that for the money being asked, you may wish to find somewhere else to stay. We will not be returning to Roa Island House under the current terms.
AGS1000
2019-09-18

Disappointed
Arriving at the house we found the fridge and freezer dirty, which we had to clean ourselves before putting our own food in there,we found broken glasses also out of date mouldy mushrooms packet of uncle bens rice and old opened drinks. Clearly the cleaning team aren?t cleaning these properties properly. The rooms weren?t as nice as the pictures they show also are very tiny and smell because of the condensation. The beds are the worst! Not comfy and very old The beds were springy and despite request for a mattress topper they did not provide any. There are no locks on any of the doors,doors in the house are very heavy not all doors had stoppers it's very dangerous for little children as there was a risk of them catching fingers in them. One of the children caught her fingers on the dining room door which as well as being heavy it also shuts very fast. Not happy had to be on alert at all times. The living rooms and dining rooms are very backdated, dark, dingy and the house just smelt weird. Only good thing about this house was the view from the garden. We also saw mice in the conservatory, Also we got charged £50 for a lamp which we ?apparently broke!? And from reading reviews here I can see other people got charged for the same thing! Be careful of staying at this place because you will be charged for things you didn?t do! Will definitely not be returning here. In a nutshell I would not recommend staying here for families with young kids.
Mrs_WorldTraveller89
2019-08-03

Not as fun or relaxing as I thought it would be!
This was meant to be a lovely relaxing family holiday but unfortunately it was a little bit far from it. About 15 minutes after our arrival to the house our Tesco order arrived, when we went to put all our food away in the fridge/freezer we saw that it was not clean & so we had to wipe down & clean the whole insides ourselves. We also noticed a couple of glasses had chips in them, the glasses are very thin & flimsy I might add so it's no wonder that getting a chip or a crack in one of them is very easy. Although there are plenty of plates, cups & cutlery they did not have enough pots & pans to cater for a large family (good thing we took a few of our own). You might ask so what but this property is advertised as self-catering & able to accommodate large families of up to 16 (which we were) so plenty of large saucepans to cook in should be provided. The bedrooms were not as big as they looked in the pictures, the beds were awful, the room that had the king size bed in was the worst, the mattress was so thin & springy I found it hard to sleep the whole 7 nights I was there, I did phone up Sykes & asked for a mattress topper or something but nothing was provided, it left my husband & I with very bad backache afterwards. The room that had twin beds made into one queen size bed was very uncomfortable too, I assumed that when you put two beds together the mattress that is on top is a queen size one too or at least a topper of some sort but no, it just had a bedsheet over it so when you lie on it you can feel the crevice against your back which meant the couple who shared the bed with their toddler didn?t sleep well either. I have to mention the en-suites in 3 of the bedrooms, they looked like they were built into the rooms & none of them had any sort of air vent or ventilation or a window to open, so if you had a shower there was a damp smell lingering afterwards presumably from the condensation. There was an incident that happened to us on the day we arrived too, we noticed a couple of lads looking over the garden wall watching us (the wall is waist high), they were stood watching for a good 8-10 minutes so my sister & her husband went out to approach them, the lads saw them & ran to which they followed them & saw them run into a black car & speed off. This is a very scary & unnerving incident, we thought we would lock all the doors & try to just get on with our holiday but we noticed that the front door only had the one lock which was used to enter the house with, there were no extra dead bolts or anything to make it more secure, the back door also didn?t have any extra locks either. Even though we had no more incidents we still didn?t feel as safe as we could have felt. The only good thing about this holiday was the view out to the sea, it's very picturesque. Another thing I also do have to mention which I think is very suspicious is that 7 days after we came back from Roa Island House I got an email saying that I had apparently broken a lamp & left it on the kitchen table, & so £50 had been taken from my account. They sent me a picture of the said broken lamp but I was shocked as we had left the house as we had found it, even cleaned it too before we left. The suspicious thing is that there is another person who stayed here before us & was accused of doing the same thing, breaking a lamp & leaving it on the kitchen table & having £50 taken from their account. Strange this coincidence don't you think? So based on all these experience's my family & I won?t be returning here.
Bangla_furi
2019-07-30

fab location lovely house, few disappointments beware of being chaged for items after leaving!!
We booked this for a family get together for a special occasion with a view of it becoming an annual destination. The location is fab and the size of the house is perfect. The bedrooms are great very comfortable beds nice quiet rooms. we were a big group and all had plenty of space when all together in the living room too. was great to have a ground floor room and accessibly bathroom for my mother who is in a wheelchair. The negative point was on arrival the conservatory was leaking but we did receive a phone call that morning to inform us. The football table was in the conservatory however there was a large sheet of glass left stood up on the floor against the windowsill which prevented us from letting the little ones walk around in there. we did not want to move this incase it was damaged. the second major issue was the door to the ground floor bedroom which was used my by mother was hanging off when opened. thankfully my brother had his tools in the car and was able to re drill this and repair it. this may sound trivial but as it was a wheelchair user opening the door this was dangerous. Apart from this we had a great weekend and everything was provided for us for example plenty of kitchen wear etc good space. good parking spaces. be warned when leaving we had £50 taken from our account for a replacement lamp that was allegedly broken. Knowing we broke nothing whilst there and the picture of the replacement lamp we do not even recall seeing in the room where they have said it was damaged. On asking for proof of the damage we have been denied this as we wanted pictures of the damage and the location of this lamp. all they would tell us was that it was in the kitchen area. We left this house very clean and even washed the floors before leaving. whilst we put the initial safety issues to one side and would have booked again this after charge and ignorance with the customer service we would not be using this house again.
emmap15
2019-03-22

Details
Gas central heating with open fire in sitting room and wood burner in bedroom
Electric double oven, gas hob, additional electric oven, microwave, 2 x fridges, freezer, washing machine, tumble dryer, dishwasher, 7 x TVs, 1 with Freeview/DVD, radio/CD, WiFi, books/games/DVDs
Fuel, power and starter packs for open fire and wood burner inc in rent
Bed linen and towels inc in rent
Travel cot and highchairs available
Lawned grounds with roof covered hot tub, furniture and BBQ
Wood fired sauna that can sit 6 people
Off road parking for 8 cars
Sorry, no pets and no smoking
Shop 4 miles, pub 1 mile
Note: Hot tub unavailable from 4pm on Thursdays for weekly cleaning/maintenance
Note: No stag or hen parties at this property
Note: Roa Island is reached via a tarmac causeway
Please Note - Due to the new Government legislation the price of this property has been reduced until 29 January 2021 to accommodate smaller groups in line with the Rule of 6 regulations, as such, only the beds required will be available to guests

Get an Ordnance Survey map covering the Roa Island area.