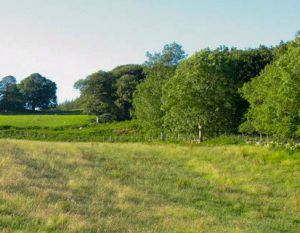 Looking towards the wooded castle motte
Cymer is known for its medieval abbey, but there is a more martial remain nearby. The motte castle was in existence by 1113, though little is known about its origins beyond the name of its builder, Uchdryd ab Edwin. The castle motte is now overgrown with vegetation, though there are scanty masonry remains.

Most of the history of Cymer Castle is the result of guesswork. We know it is attributed to a Welsh leader named Uchdryd ab Edwin, and mentioned in 1113; the earliest written record of a Welsh castle to survive. The pertinent text reads, 'the sones of Cadwgan ap Bleddyn overthrew in AD 1113 upon some displeasure against the sons of Uchdryd ap Edwin who had built the same'.

The castle mound stands 15 feet high and has a diameter of 43 feet at the summit. It stands within what was once the deer park for Cymer Abbey.

Almost lost amid the trees that encircle the motte is a ruinous stone gabled tower, possibly the remains of a 16th century prospect lodge built for the abbots of Cymer. A prospect lodge was simply a viewing platform, albeit one with style! Another interpretation of the ruins suggest that it was a gazebo erected in the 18th century for the owners of the Hengwrt estate.

The fact that there is no trace of a bailey or any defensive ditch around the motte does support the notion that the 'castle' had no military function. The tower originally stood 1 1/2 storeys high over a raised cellar. The north gable still has its chimney relatively intact.

The east and north walls are almost full height, but the south and west sides are no more than crumbling stones. In the north east corner is an angled fireplace. There is what looks like a ruined stair in the opposite corner. Wooden lintels survive over several window openings. Both interior and exterior faces of the stone walls were originally covered with render.

About Cymer Castle
Address: Llanelltyd, Gwynedd, Wales
Attraction Type: Castle
Location: 1 mile west of LLanelltyd, on a minor road off A470. Exit for Cymer Abbey, but stay right and the next junction. The castle is in a wooded copse off the lane to Llyn Cynwch.
Location map
OS: SH732 195
Photo Credit: Eric Jones, licensed for reuse under the Creative Commons Licence

More self catering near Cymer Castle >> 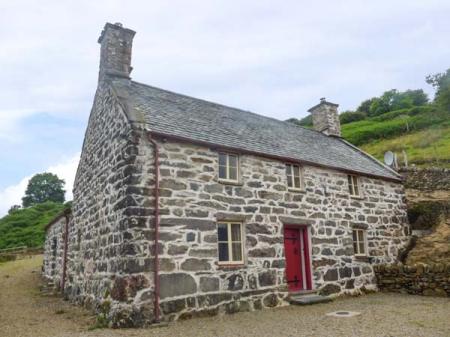 A Grade II listed, former farmhouse, in an isolated location on the foothills of Y Garn mountain, two miles from the village of Llanelltyd, and sleeping seven people in four …
Sleeps 7 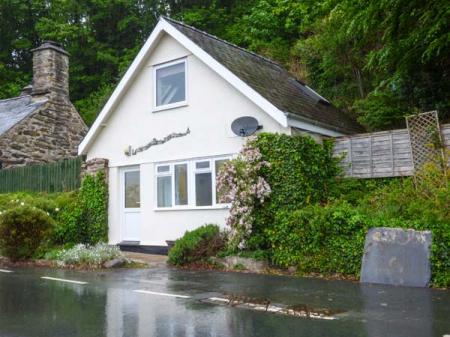 This detached cottage is at the head of the Mawddach Estuary, 1.5 miles from Llanelltyd and 4 miles from Dolgellau and sleeps two people in one bedroom.
Sleeps 2