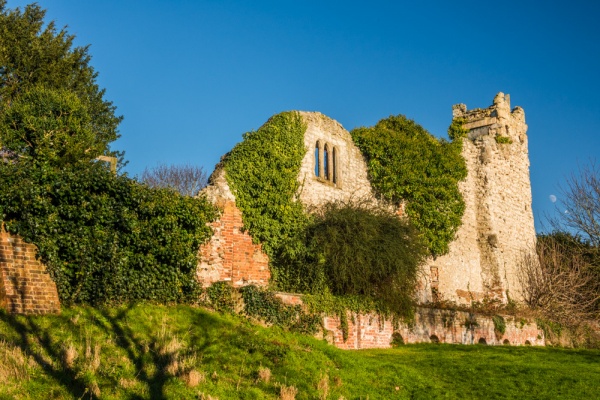 Wallingford Castle was an important royal fortress on the banks of the River Thames. It was begun around 1067 by a Norman baron named Robert D'Oilly, on the orders of William the Conqueror.

William wanted to control the Thames Valley with a series of royal strongholds, and Wallingford was part of this strategy that resulted in other castles at Oxford and Windsor. D'Oilly was granted estates that included the Saxon fortified town of Wallingford, and he solidified his rule by marrying the daughter of the former Saxon landholder.

D'Oilly's castle followed the traditional Norman motte and bailey design, with a high conical mound topped by a timber keep, set within a bailey, or enclosure, which housed secondary buildings protected by a perimeter palisade. The new castle incorporated parts of the Saxon town walls.

D'Oilly not only built a strong fortress, but founded a college of priests, dedicated to St Nicholas, within the castle walls. Today the remains of St Nicholas' College is the best-preserved part of the castle.

Over the centuries the original Norman fortifications were rebuilt in stone, with ranges of buildings to serve as barracks and royal residences. The motte and bailey design was altered to create a shell keep within high curtain walls, and a system of impressive earthworks added to strengthen the stone defences. 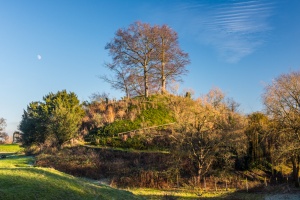 Throughout the 12th and 13th centuries, Wallingford grew to become one of the most important royal fortresses in England. Empress Matilda held the castle during the Civil War with King Stephen, and though the castle was besieged on several occasions it was never captured. When Matilda escaped from Oxford Castle in 1141 she fled to refuge at Wallingford Castle.

The lord of Wallingford at that time was Brien FitzCount, a harsh lord who built a notorious prison within the castle. It was said that the cries of tortured prisoners from Brien's prison were audible in the town.

In 1153 King Stephen and his army faced a force of men under Henry, son of Empress Matilda, outside Wallingford Castle. The conflict was a stalemate, and produced The Treaty of Wallingford, a truce that eventually led to the end of the Civil War.

King John seized Wallingford Castle during his revolt against the rule of Richard I in 1191, and though he was forced to surrender the castle, he seized it once again when he came to the throne in 1199. John strengthened the castle defences and it was a major base in his conflict with the barons that led to the signing of the Magna Carta at Runnymede in 1215.

The castle was owned for a time by Richard, Earl of Cornwall, and was later captured by Simon de Montfort in the Second Barons War. De Montfort imprisoned Henry III and his family at Wallingford after the Battle of Lewes, but the castle was essentially a luxurious royal residence throughout the late medieval period. Edward II gave the castle to his favourite, Piers Gaveston, and it was here that Gaveston arranged the largest medieval jousting competition ever held. 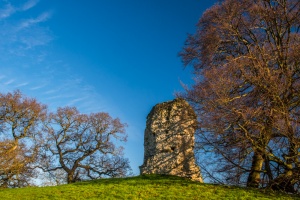 Ruins of the Queen's Tower

Queen Isabella, the wife of Edward II, used Wallingford as the base for her invasion of England and overthrow of her husband, but as time went on the castle was used more as a prison than a residence.

It fell into decay in the 15th century and building materials were taken to be used at Windsor Castle. King Charles I refortified the castle during the Civil War. Parliament tried unsuccessfully to capture the castle in 1645, and returned in 1646 for a 16-week siege that eventually forced the garrison to surrender.

Parliament ordered the castle slighted so that it could not be used again. The defences were pulled down, though a prison was maintained into the 18th century. In 1837 a mansion house was built within the castle grounds, but this, in turn, was pulled down in 1972.

The castle grounds are now open to the public free of charge. There are two main sections; Castle Gardens, where you will find the ruins of St Nicholas College, and sections of the adjoining wall, and Castle Meadow, with access to the Norman motte, two sections of ruined wall, and the extensive earthworks. One of the sections of wall formed part of Queen's Tower, a suite of royal chambers. 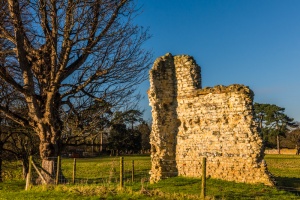 A section of ruined curtain wall

Castle Gardens are usually open daylight hours. The main access is a gate off Castle Street on Bear Lane, and there is a paid parking area on the road, near the gate. Within the gardens are the best-preserved sections of the castle buildings.

Castle Meadows is open at any time and allows access to the earthworks and to the castle motte itself. When we visited the motte was closed due to safety concerns with erosion on the sloping hillside. It still makes quite an impressive sight, however, even if you can't climb to the top.

There are information panels around the site that really do a very good job of explaining the layout of the castle and its defences.

What really struck me is how incredibly extensive the castle was. The earthworks and moat ditches seemed to go on forever. Wallingford is one of the best examples of Norman defences I've seen in England. If you come expecting a castle with turrets and parapets you may be disappointed, but if you come with an eye for history you can't help but be impressed.

The castle must have been an extraordinary sight in its heyday, with layers of defensive earthworks surrounding three vast bailey enclosures, with ranges of buildings inside the enclosures and a striking motte surmounted by a central keep. I highly recommend Wallingford Castle. 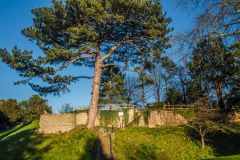 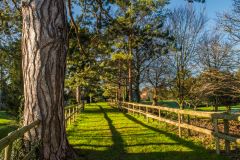 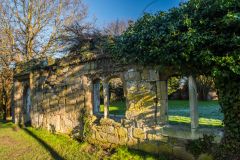 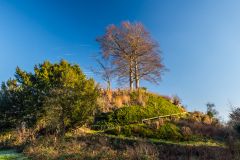 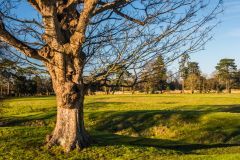 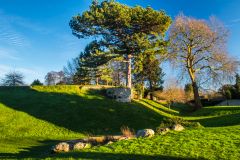 More self catering near Wallingford Castle