HERITAGE HIGHLIGHTS:   Saxon stonework in the nave walls and tower 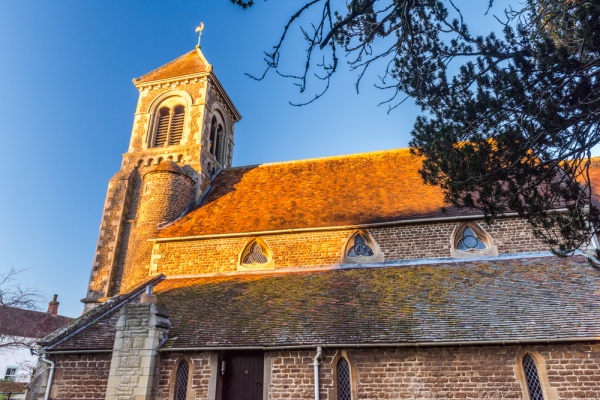 St Leonards is the oldest church in Wallingford and stands on the Thames Path, just a few steps from the River Thames. There has been a church here since at least the late Saxon period, though it is possible that the first church on the riverside site dates back as early as the 6th century. Before the Norman Conquest, it appears to have been known as Holy Trinity the Lesser.

You can easily make out the distinctive late Saxon stonework, with stones laid in a herringbone pattern. The Saxon stonework is most easily seen in the north wall and over the round-headed windows. The oldest part of the current structure is the tower, much of which is 11th century.

In the 13th century St Leonard was united with St Lucien's church (now demolished) and it formed one of 14 medieval churches in Wallingford. Henry I granted the church to the monastery of St Frideswide at Oxford, and after the Dissolution of the Monasteries it reverted to the crown. 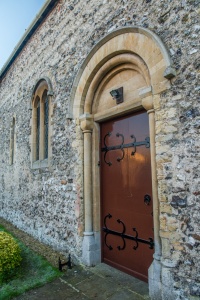 The church was heavily damaged in the 1646 siege of Wallingford, when Parliamentary troops used the church as a barracks. It took repairs in 1656, 1695, and 1700 before the church could finally be reopened for worship. From 1849 the church was rebuilt in Gothic Revival style, under the direction of Henry Hakewill. Thankfully, Hakewill's restoration preserved sections of the original Saxon building. Hakewill's efforts were not universally appreciated; architectural historian Nikolaus Pevsner bitingly declared that Hakewill had not restored St Leonard's, he had 'mistreated' it.

One highlight of the church interior is a series of four murals of angels painted in 1889 by artist George Leslie, who lived in St Leonard's Lane. Other highlights include a series of finely crafted 18th-century monuments in the nave.

There is an information panel about the church and its history in the churchyard. The panel relates a curious fact about the nearby Oxford University Boat House on the riverside. It was at the Wallingford boathouse that the longest boat on the Thames was built.

The boat was 197 feet long and was made of wood and canvas by a team of Royal Engineers in 1914. The Engineers overlooked one thing; the boat was so long that the crew could not turn it around in the river. They had to moor on the bank, get out, swing the boat around on the bank, and put it back in the river before they could reverse direction.

St Leonard's is easy to find. The church is at the southern edge of historic Wallingford, a few steps from the River Thames and just a short walk from the market place. Unfortunately, the church is normally closed, and we did not see any signs indicating a nearby keyholder. It was enjoyable to explore the churchyard, however, and see if we could pick out sections of Saxon herringbone stonework. 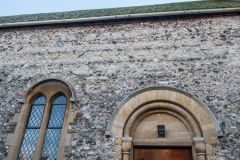 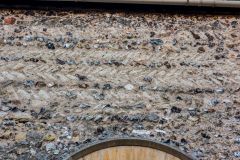