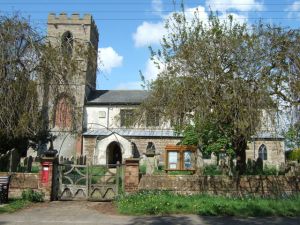 Parson Drove, St John's Church
This wonderful medieval Fenland church was built as a chapel of ease for the church at  Leverington. A chapel of ease was basically a convenience for villagers who lived too far from their nearest parish church. In this case, St John's eventually became a full-fledged parish church, only to be declared redundant a century later. It is now in the care of the Churches Conservation Trust.

The building is quite large, and indeed, was originally much larger, but the chancel was destroyed in a disastrous flood in 1613. St John's is primarily a Perpendicular church, though there are bits and pieces from the 13th century. The most striking exterior feature is the tower, some 70 feet in height, built of Barnack stone.

By contrast, the remainder of the church seems quite long and low, with a Perpendicular clerestory rising above aisles so low that they rather resemble a lean-to shed. The small 15th-century porch has a very nice timber roof.

Much older is the recessed north door, which dates to as early as 1220. There are also 14th-century windows in the north wall. Some fragments of medieval glass with heraldic symbols have survived in the north windows.

The octagonal font is fairly simple and dates to the 15th century, and there is a carved Jacobean pulpit from 1677. St John's is not spectacular, but very enjoyable, with some attractive Perpendicular features.