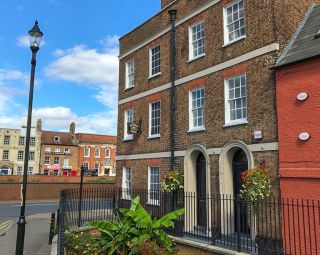 Octavia Hill Birthplace Museum
Wisbech native Octavia Hill was the co-founder of the National Trust. Her life and work are commemorated in the house in which she was born.

Octavia Hill was born in 1838 to a successful corn merchant named James Hill and his wife Caroline. Her unusual name comes from the Latin for the number eight, as she was the couple's 8th daughter. Octavia was only 2 years old when her father went bankrupt. James Hill eventually suffered a breakdown, termed later a 'temporary fit of insanity'.

Caroline Hill moved to Finchley, then on the outskirts of London, and brought up the children by herself. Octavia spent her childhood growing up in this semi-rural setting, enjoying climbing trees and exploring nature.

Both her parents were firm socialists and followers of Robert Owen, and her grandfather, Dr Thomas Southwood Smith, was an active social campaigner for the poor. From these influences, Octavia Hill developed a lifelong passion for creating a more fair and just society, and in particular, bettering the lot of working people.

In 1885 she joined with Robert Hunter and Hardwicke Rawnsley to campaign against railway development in the pristine countryside of the Lake District. From this social action campaign came the founding of the 'National Trust for the Preservation of Historic Buildings and Natural Beauty', the forerunner of the modern National Trust.

From its foundation, the Trust has acted to preserve and protect historic buildings, countryside, and even entire villages. It has purchased and managed vast tracts of land along the coast, in mountainous areas, and farm and moorland. It protects castles, stately homes, industrial heritage sites, even pubs, inns, churches, and chapels.

Octavia Hill did not stop at helping found the National Trust; she campaigned for recreational open spaces in London, the creation and preservation of paths and trails, and helped found the group that would eventually become the Army Cadets. She wrote articles publicising the need for improving the quality of life for the poor of London.

Her articles attracted support from members of the nobility and the royal family. Princess Alice became a patron of her work and had her articles translated into German. Hill travelled extensively, giving public lectures, teaching classes, and training volunteers to manage social housing. She helped popularise occupational therapy and is seen today as the founder of the modern approach to social casework.

Today, the house where Octavia Hill was born and spent the first 2 years of her life can be visited for a glimpse into the amazing whirlwind life of this remarkable woman.

Though the house is of historic importance in its own right - built in 1740 and listed Grade II* - it is not owned by the National Trust, as you might expect, but by the private charity called the Octavia Hill Birthplace Museum Trust.

The interiors have been preserved to show the Georgian origins of the house, and, you can see exhibits on the life and work of Octavia Hill and her circle of fellow campaigners. There is also an ongoing programme of arts and lectures.

The Dog in a Doublet - 13 miles
Peterborough, Cambridgeshire
Stay from: £65.00