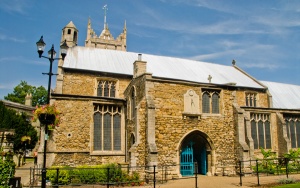 The church of St Peter and St Paul at Wisbech is an unusual building with a complex architectural history. It has twin naves and matching dual chancels, plus north and south aisles and a west tower. The church was built around the year 1187, though tradition places the founding somewhat earlier.

The original Norman church was a simple affair, consisting of a nave and west tower. By the mid 13th century the growing prosperity of Wisbech led to the church being enlarged and extended eastward. The eastern apse was demolished and a new, wider chancel added. The oddly angled joint between the 'new' chancel and the nave is plainly evident today. The walls of the original nave were torn down, and a second nave and aisle added to the north.

In 1450 the Norman tower collapsed in a storm. Rather than simply replace it, the south side of the nave was taken apart and rebuilt with slender Perpendicular arches between the naves. As for the tower, it was eventually replaced around 1530, which is offset from the main body of the church. 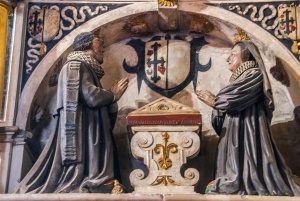 Near the altar are a set of medieval misericords, or 'mercy seats'. Also look for the life-sized brass of Sir Thomas de Braunstone (d. 1401), constable of Wisbech Castle (now demolished). Thee are several interesting Jacobean painted monuments in the chancel. One is to Matthais Taylor (d. 1633) and his wife. A contemporary monument is to Thomas and Audrey Parke.

Near the south door is a very large Royal Coat of Arms, which, depending on which source you believe, was painted during the reign of James I, or Charles II.

The most striking aspect of Wisbech church is the sheer breadth of the interior. The twin naves under one roof are probably unique in England.

An annual Rose Fair is held in the lovely gardens outside the south porch. 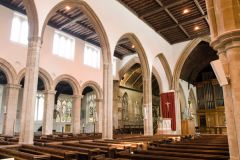 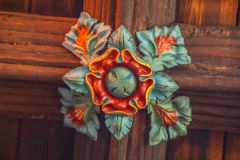 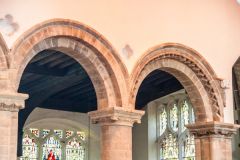 More self catering near Wisbech Church