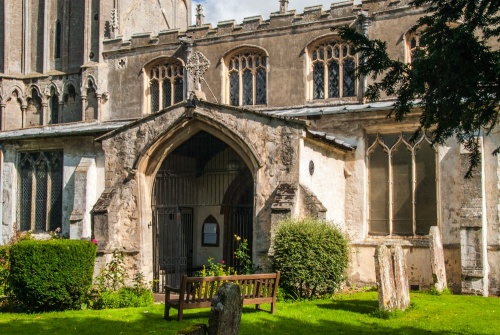 Though Walsoken is a suburb of Wisbech, Cambridgeshire, it is actually across the border in Norfolk. All Saints Walsoken is one of the premier Early English churches in the country. The church was founded around the year 1146 and is composed of a nave, chancel, north and south aisles, and a west tower with a 15th-century spire.

Seven pillars line the nave, and these pillars are alternately rounded and octagonal. The chancel arch was added in the 13th century, as was the tower arch, south porch, and west tower.

The nave roof is especially fine hammer beam with painted figures on the jack posts. The nave itself is 12th century but the clerestory above it is 15th century.

The 15th-century font is of the octagonal style known as Seven Sacrament. It is beautifully carved, with panels around the bowl illustrating the Seven Sacrament (Baptism, Confession, Confirmation, Mass, Matrimony, Ordination, and the Last Rites) with the final panel illustrating the Crucifixion. Around the base are further carvings of saints, and religious symbols. The font was given by John Beforth, and Stephen and Margaret Honyter sometime around 1544.

The font is in excellent condition, and must surely be one of the finest such relics in Norfolk, a county known for its superb medieval fonts.

The parclose screen separating the chapel from the south aisle is beautifully carved, with very fine, almost delicate, tracery. The choir stalls are Victorian, but the carved bench ends are medieval and include some excellent carved figures such as a bishop with his hat blowing in the wind.

All Saints is rated as one of England's Thousand Best Churches, in the book of that name by Simon Jenkins. 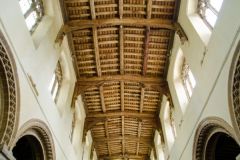 More self catering near Walsoken Church