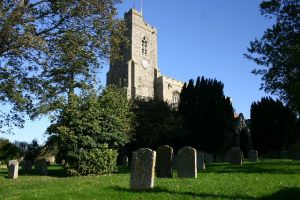 Isleham, St Andrew's Church
St Andrew's church in Isleham gets onto most lists of the best historic churches in Cambridgeshire, and it is easy to see why. The church dates to 1331, when an earlier church on the site was rebuilt in grand style. The interior was largely rebuilt in the 15th century, and the west tower had to be rebuilt in 1893 when the medieval tower collapsed.

Though there are bits of the 14th-century building still intact, much of what we see today is in wonderful 15th-century style, particularly the clerestory and roofs.

We owe the grandeur of St Andrew's to Crystofer (Christopher) Peyton, lord of the manor. The Peyton's had owned Isleham manor since about 1430 when Thomas Peyton married Margaret Bernard of Isleham.

Beginning around 1495 Christopher Peyton had the nave raised, a clerestory inserted, and a marvellous timber roof built - a combination of tie-beams and hammer-beams - to support his creation. The clerestory is enormously tall and seems to fill the interior with light.

The carved wooden beams are decorated with beautifully crafted wooden angels and an inscription to Peyton's parents and elder brother. There were originally 60 or so angels, but only a handful of these survive today.

In 2004 a wonderful carved angel figure, known as the Isleham Angel, fell to the floor and was damaged. The angel was patched up and replaced, and while this was going on an amazing discovery was made. Hidden in the rafters was a marvellous wooden carving of a Green Man.

It was not a part of the regular decoration scheme of the roof and seems to have been hidden away. It was attached by a single spike through the nose of the Green Man, which suggests that it was put in place hurriedly. For more details on this fascinating medieval carving, see the Peyton Green Man website.

Beyond the roof, the interior has a host of other interesting features. There are a set of carved misericords (mercy seats) in the chancel, dating to about 1350. In the Peyton Chapel are two very large, very ornate 16th-century marble monuments, and brasses to members of the Bernard and Peyton families.

The largest monument is to Sir John Peyton (d. 1620) and Alice, his wife. Beside it is a slightly more subdued marble tomb to Sir Richard Peyton (d. 1590) and his wife Elizabeth.

Against the south wall is the very worn effigy tomb of Sir William Bernard (d. 1293). Nearby is the effigy of his descendant, Gilbert, who died in 1340. Gilbert's effigy is in much better shape, though he has lost his arm and sword. The detail of the armour is excellent.

The final Bernard (before the estate passed to the Peytons) was Sir John (d. 1451) whose brass is set into a table tomb against the west wall. In the sanctuary is a tomb with memorial brasses to Thomas Peyton (d. 1484) and his two wives.

There is also a very striking Elizabethan eagle lectern and medieval benches with carved ends.

One very touching modern item is a metal Hanukkah candlestick, the gift of boys from the Jews Free School in London. The students were evacuated to Isleham during WWII, and given the south aisle as a place to worship.

A short distance away from the church is Isleham Priory, the remains of a lovely 11th-century priory church, now in the care of English Heritage.