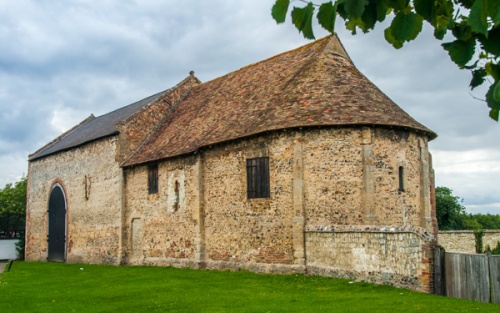 A small Benedictine priory church in classic Romanesque style, dating to 1090. The Norman lord Alan of Brittany gave this church, dedicated to St Margaret of Antioch, and a second church at Linton, to monks from the abbey of St. Jacut de la Mer in Brittany.

The rector of Linton acted as prior of Isleham, though that title may be deceptive; there was no set of monastic buildings as you might find in an abbey such as, say, Thornton Abbey, near Peterborough. The prior may have had one or two monks to assist them, that would have been the extent of the religious community.

Despite this, Isleham was technically an alien priory, because the prior was nominated by the abbot of the French mother house, and this was to cause problems in later years.

The church plan is very simple; it is composed of a nave, chancel, and sanctuary, with the latter punctuated by a rounded apse. Around 1200 the original lancet windows of the sanctuary were replaced with the larger windows we can see today. A consecration cross is visible in the sanctuary and further outlines of crosses in the nave. The chancel arch is original, but the arched doorway in the choir was added in about 1300.

The priory had ongoing legal disputes with the parish church (easily visible from the priory church). Henry V seized the priory during the Hundred Years War as the estate was thought to be contributing to the French war chest. In 1414 the priory, along with all the other remaining 'alien priories' were seized by the crown, and Isleham was granted to Pembroke College, Cambridge.

The college used the other priory buildings for building stone. In later years the church was used as a barn before it came into the hands of English Heritage. Of the priory itself, no trace remains. The church is normally closed, but a keyholder is very close by (directions on the information plaque outside the church).

We found Isleham Priory to be quite enjoyable. There's nothing at all to see inside the building (i.e. no pews, woodwork or any of the fittings found in medieval churches). What this does, though, is let you see clearly the 'bones' of the building; the shape and size of the Norman walls, windows, and doorway arches. If Norman architecture is your thing, you'll enjoy Isleham Priory Church.