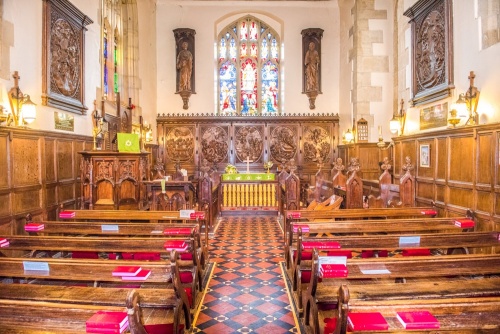 Once owned by Richard III and associated with Katherine Parr, the chapel and castle date from the early 15th century. The half-ruined castle is not accessible to the public, but visitors are welcome at the chapel.

The first castle at Snape was a 13th-century hall, supported on timber piles sunk into the boggy ground. Late in the 13th century, the Neville family acquired Snape through marriage. The medieval manor was destroyed around 1420 and replaced with a castellated house by George Neville, Lord of Snape and Danby.

When Lord George died, his son Richard was still a minor, so the castle became crown property under Richard III. Richard Neville's son John, the 3rd Lord Latimer of Snape, was Katherine Parr's second husband, and Katherine probably lived at Snape much of her married life.

Katherine was known to be deeply religious and probably worshipped in the castle chapel on a daily basis. We know that Katherine was here at Snape during the Catholic uprising known as the Pilgrimage of Grace in 1535 because her husband wrote a letter at that time expressing his concern for her safety.

Katherine, of course, would eventually marry Henry VIII after Lord John's death. A long-standing legend says that a young woman with golden hair, dressed in a blue Tudor dress, has been seen numerous times at Snape Castle, and one theory is that the ghostly figure might be that of Katherine Parr. 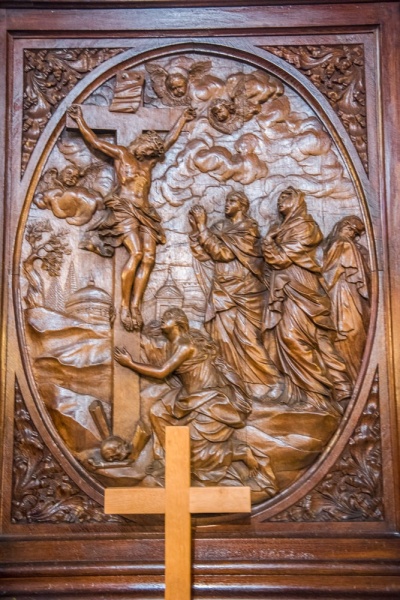 A panel from the 18th-century reredos

From the Nevilles, the castle passed to the Cecil family through marriage. Thomas Cecil inherited the lordship in 1577 and proceeded to rebuild Snape Castle as we see it today. The Cecils had their own family seat at Burghley, in Lincolnshire, so Snape eventually fell out of favour.

An agent was installed at Snape to look after the house. The agent lived in one wing of the castle but seems to have done little to maintain the rest of the building, as the remaining three wings were allowed to decay and were never repaired.

The castle chapel is first recorded in the early years of the 15th century. It is located on an upper floor on the south side of the castle, approached by way of an external stair leading to another internal stair and then to the chapel itself. A small vestry is at the top of the stair and links to a passage from the castle (now blocked).

The chapel was renovated around 1720, but by the late 18th century it had fallen into disuse and was used as a storage area for grain and rapeseed. Then in 1802, William Millbank scavenged panelling from the castle itself to furnish the castle.

Outside the chapel door is a reprint of a document recording the state of the chapel at the turn of the 19th century. It describes the chapel's parlous state eloquently:

'Another room, the ancient and domestic chapel, was in a most dilapidated condition, the stone tracery of the windows being greatly destroyed and the lights blocked up with stone. It had degenerated into a mere barn house where rapeseed was stored and in consequence of the dampness the noble painting covering the ceiling had been obliterated through the peeling and crumbling away of the ceiling'. 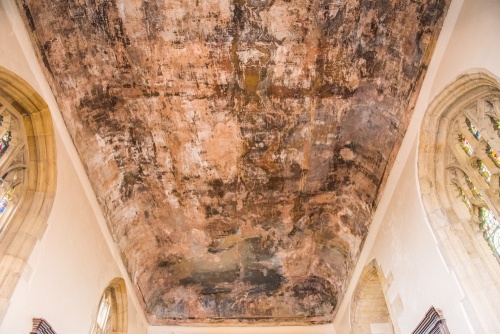 The highlight at Snape is the painted ceiling, created by the Italian artist Antonio Verrio. Sometime before 1707, the 15th-century chapel roof was removed, to be replaced by a plaster ceiling. Then Verrio was called in to paint a fresco on the new plasterwork depicting 'Wonder and War in Heaven', from Revelation 12,7.

Verrio was a natural choice, for he had also worked on the stunning frescos at Burghley House for the Cecil family. The chapel ceiling is very worn and has suffered badly over the years when the chapel served as a grain store.

The large east window above the altar has stained glass by the London firm of Clayton and Bell. Even more impressive is the reredos, beautifully carved with Biblical scenes. The date 1725 is carved on the centre panel. The reredos was purchased by the Millbank family of Thorp Perrow from a collection of European church carving collected at Scarisbrick Hall in Southport.

It is hard not to be impressed by the chapel interior, and at the same time to feel sadness at all that has been lost. The Verrio ceiling is badly damaged, but by looking at the display of ceilings in the Heaven Room of Burghley House you get a sense of just how amazing it would have looked before the ravages of time and a damp environment took their toll.

The chapel was purchased by the Diocese of Ripon and Leeds in 1926 as a chapel of ease for the church of St Michael at Well. Regular services are still held here and visitors are welcome every day. Snape Castle Chapel is an excellent example of a Pre-Reformation private chapel.

Access is very easy. There is a signposted path beside the castle, leading to a gate. From the gate, a path leads around the back of the castle, under a stone arch, to a set of steps. From here you can climb a flight of stairs to the chapel. From the top of the steps, you can look out across ruined walls that formed part of the castle complex. Be aware that there is no dedicated parking area for the chapel. We simply pulled off onto the verge outside the castle. 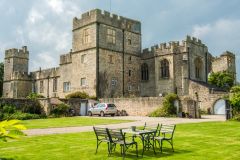 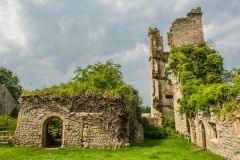 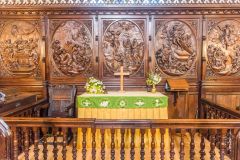