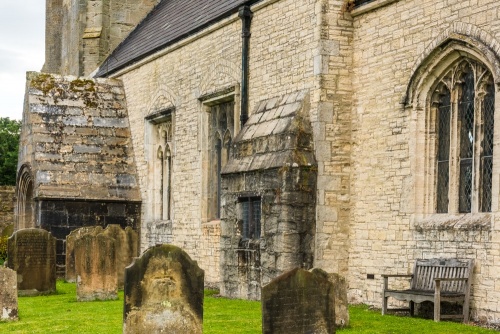 Overlooking the River Ure in the Yorkshire village of West Tanfield is the medieval parish church of St Nicholas. The church stands beside Marmion Tower, a 15th-century gatehouse that once gave access to Tanfield Manor (now vanished), the home of the Marmion family.

The church dates to the late 12th or early 13th century, but very little remains of that early medieval building. The church was comprehensively rebuilt in the 15th century and restored in 1859, a restoration that swept away many of the medieval features. The south wall of the nave and the western half of the chancel still retain 12th-century stonework. 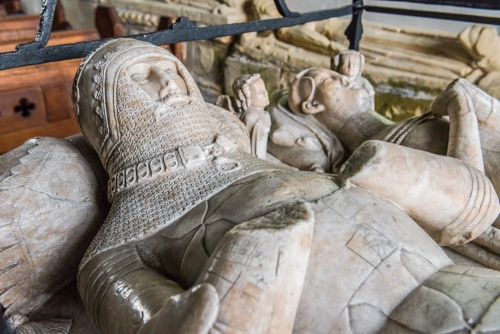 By far the most interesting historical features in the church are a pair of 14th-century alabaster effigies depicting Sir John and Lady Elizabeth Marmion. Sir John is shown wearing a bascinet (a mailed helmet), common to the late 14th century. He wears a tunic with the Marmion coat of arms and his head rests on a tilting helmet. Lady Elizabeth is shown in a gown and mantle, with a close-fitting headdress.

John Marmion was a knight who died in Spain while fighting for John of Gaunt, the Earl of Richmond. Lady Elizabeth Marmion (nee St Quintin) moved into Marmion Tower after her husband's death, using the gatehouse as a Dower House. She died in 1400.

The effigies lie under an odd wrought-iron hearse, thought to be the only one of its kind in England. The hearse has prickets for candles at each corner and another three on a central bar. 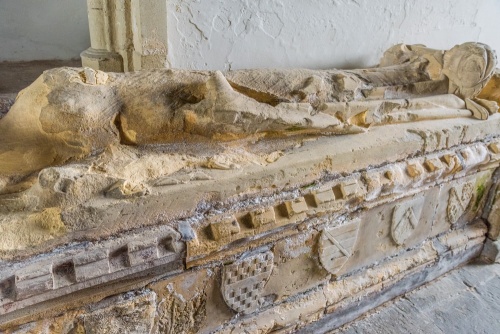 14th-century effigy of a lady

Against the north aisle wall are five more effigies. The oldest is the easternmost effigy, depicting a night in armour bearing a shield, carved around 1250. Beside the knight is a lady in 14th-century dress. Next to the lady is another, very badly worn, atop a tomb chest with heraldic shields depicting coats of arms of the Courtenay, Clifford, Le Despenser, Stafford, and Grey of Rotherfield families.

The final two effigies show a knight in mail and a lady in a mantle and gown, with a coronet on her head. Both these effigies are very worn.

Set into the floor at the east end of the aisle is a grave slab dated 1483. Only the first name - Thomas - is legible. In the chancel is a memorial brass in memory of a former rector named Thomas Sutton, who died in 1492. 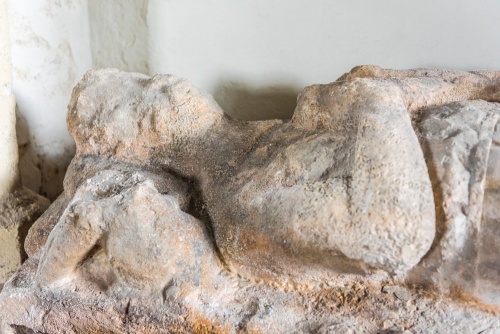 In the north aisle is a window retaining fragments of medieval glass including depictions of a saint, the Virgin Mary, and a Crucifixion scene, above coats of arms to the Marmion and St Quintin families as well as John of Gaunt's arms.

The Arton Window was installed in 1902 in memory of Thomas Arton and his wife Hannah. Thomas was a self-made man, rising from obscurity to make a fortune in the Bradford woollen industry. Hannah Arton (nee Denby) also came from a wealthy Bradford woollen family. In 1889 Arton bought the manor of West Tanfield from the 4th Marquess of Aylesbury, who was forced to sell to raise enough money to pay off debts from his profligate lifestyle.

Under the tower is a plain octagonal font, probably carved in the 15th century. Against the wall is an old parish bier with large iron wheels.

Do take the time to explore the Marmion Tower, directly beside the churchyard. The tower may have been built around 1384 when Matilda, the widow of Sir John Marmion, was granted the right to crenellate her manor house. There is a useful information sheet about the tower inside the church. 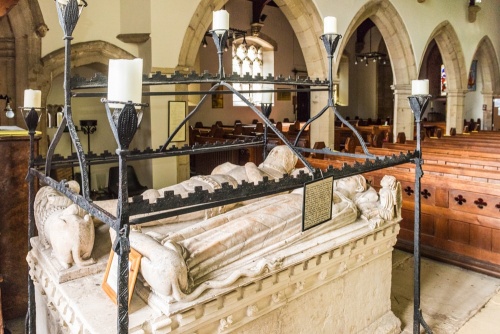 The church is on the A6108 in West Tanfield and there is parking along the road. The church is normally open daylight hours and was open when we visited. 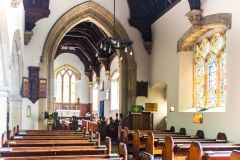 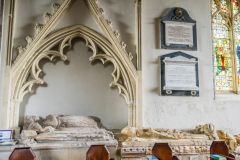 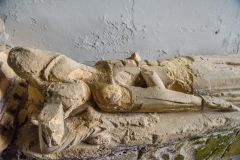 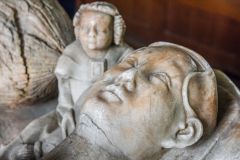 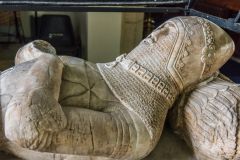 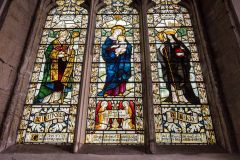 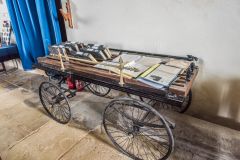