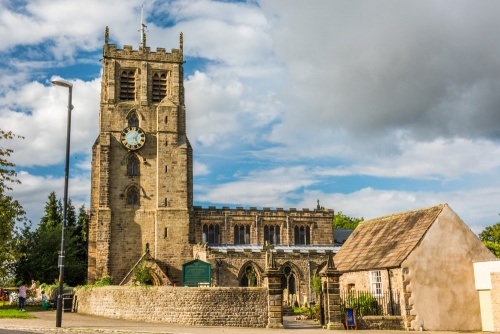 St Gregory's Church in the historic Yorkshire town of Bedale is one of England's finest historic churches, boasting an outstanding collection of medieval tombs and wall paintings. The five-light east window is thought to have been brought here from Jervaulx Abbey and is an exceptional example of 13th-century tracery.

There was a church here as early as the 9th century. It was much smaller than the present building, occupying roughly the space taken up by the present nave. You can still see the steeply pitched roof of the 9th-century church over the tower arch.

The Domesday Book of 1086 records a church at Bedale. Either the church had been very recently built or it somehow survived the destruction of William the Conqueror's Harrying of the North in 1069-70, when records show that no houses were left standing between York and Durham, and most churches were destroyed. 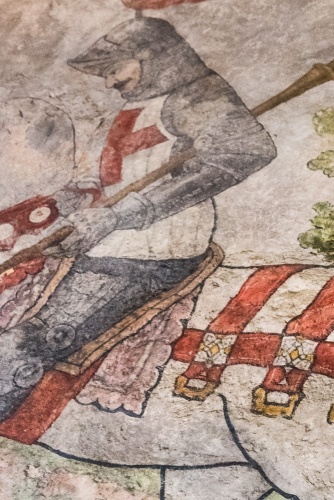 A north aisle was added around 1180 and the Saxon chancel was extended two decades later. A Lady Chapel was added to the south wall, but this was later swallowed up by a south aisle added around 1287 by Brian Fitzalan, the Lord of Bedale. Fitzalan endowed a chantry with monks from Jervaulz Abbey paid to say prayers for the soul of his family.

The chancel was enlarged again in 1320. A triple sedilia(seating for the clergy) was inserted in the south wall. The chancel floor was raised to make space for a vaulted crypt beneath. The crypt is reached by an external door and by a hidden stair next to the altar.

The north aisle was enlarged in 1342 to make space for a chapel dedicated to St George, which now serves as the vestry. A clerestory was inserted in the early 15th century to bring more light into the church. 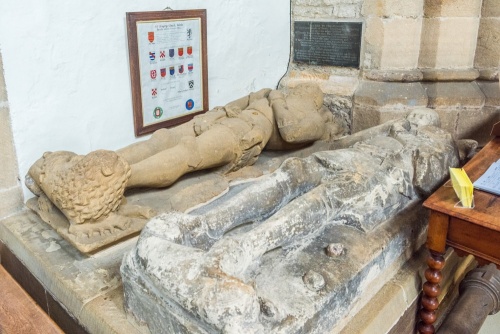 Bedale's location made it a target for Scottish raiders and to counter the threat a fortified tower was added around 1330. The tower was begun by Matilda, the second wife of Brian Fitzalan, and acted as a refuge for villages during times of trouble.

The second stage has a living area with a fireplace, garderobe, and window seats, while the third stage was originally used as a sleeping area but now holds the church clock. The upper stage holds a the belfry, with a ring of eight bells. This is one of the best examples of a fortified tower in the north of England.

The importance of the fortified tower is emphasised further as the entrance porch is attached to the tower rather than to the nave, as is more common. The bottom stage of the tower has a high vaulted roof.

Under the tower is a beautifully carved Victorian font made of Caen stone. On the tower wall are Benefaction Boards, listing bequests made to the church. These bequests are still administered by a church body known as 'The Rector and Four and Twenty'. 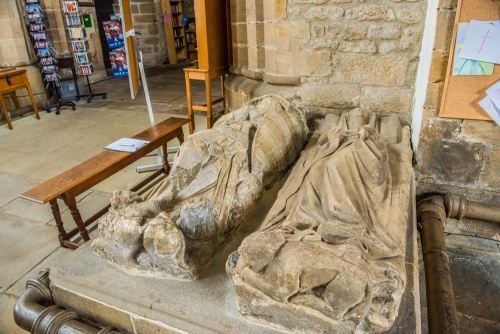 Inside the entrance is the tower stair where you can see the groove used to raise and lower an iron portcullis. The portcullis was hidden from view for centuries and had been forgotten before a lightning strike in 1830 brought it crashing down the groove to the ground, sealing the church. It had to be removed by the local blacksmith.

In 2003 a carved piece of a Viking hogback gravestone was discovered in the church crypt. This is one of only three depictions of the Norse god Weland, or Wayland in Britain, the other two being at Leeds and Sherburn.

In Norse mythology, Wayland was a blacksmith. according to legend, Wayland was captured by a king, who cut the smith's hamstring to stop him from fleeing captivity. Wayland escaped anyway, by building a flying machine.

The carving shows the tail of the flying machine and Wayland's legs, feet, and body bound by a tangle of Celtic knots. The end of the gravestone has part of a nativity scene.

The Wayland Stone is fascinating because it depicts both pagan and Christian symbols, a reminder of the transition from paganism to Christianity in the north of England and the strong legacy of Norse culture in the region.

The Wayland's Stone and other pieces of early carved stones are kept in the crypt for security after one was stolen. Please contact the rector if you would like to view them.

In the south aisle is another carved stone showing traditional Anglian knotwork designs. 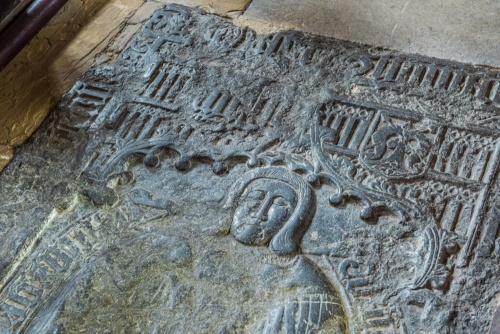 On the south side of the tower arch are two 15th-century effigies of knights. We do not know who the effigies represent, but we can be fairly certain as to their dates from the style of armour. One knight wears a surcoat of double-link armour and plate-armoured gauntlets, suggesting a date of around 1410. The other knight wears plate armour that was in common use around 1480.

On the north side of the tower arch are two more effigies. This time we do know who they represent. The man is Brian Fitzalan, Lord of Bedale, and the woman is his first wife Muriel. Fitzalan was a close friend and military leader to King Edward I. He served as the Warden of four Scottish castles and later as the Custodian of Scotland. He fought beside Edward at the Battle of Falkirk in 1298 and died in 1306.

His effigy is carved of magnesium limestone from the quarries at Tadcaster. Unusually, he is shown bare-headed, whereas most knights are shown in a battle helmet. 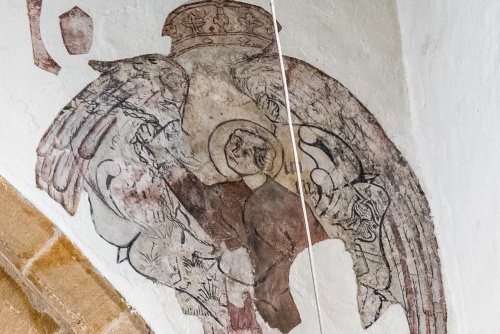 Set into the vestry wall is an effigy of a priest holding a book. The effigy is thought to represent Brian de Thornhill, who was rector at Bedale from 1308-1343. Beneath his effigy is a tomb chest incorporating part of Brian Fitzalan's early 14th-century tomb chest.

Set into the floor of the north aisle is the grave slab of Thomas Jackson (d 1529). Under the communion rail is a Latin inscription commemorating Peter Samwales, Rector of Bedale from 1660-1693. The choir stalls were carved by Robert 'Mouseman' Thompson of Kilburn. Look for his trademark mouse symbol carved into the stalls.

Restoration work in 1926 revealed a collection of medieval wall paintings. The largest and finest is a depiction of St George and the Dragon in St George's Chapel, painted in the 15th century. Above the pulpit is a 13th-century painting showing a bent riband design. To the right of the chancel arch is a large mural depicting an angel in a red robe.

Over the arch is a painting of the Lord's Prayer while on the north side of the arch is the Apostles Creed. Both texts were painted in the 17th century. Over the east window are the coats of arms of the Stapleton and the de Grey families, who held the manor of Bedale after the Fitzalans.

Just inside the churchyard is the Old Grammar School, built in 1674. Thee is thought to have been a grammar school here since the late medieval period, but the first written record comes from 1548. A new grammar school was built in 1888 and the old school fell out of use. It has been restored and is now used as a meeting space. 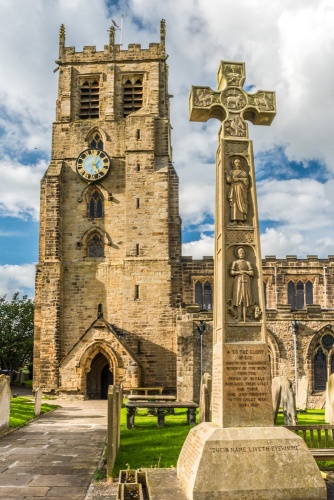 The war memorial and fortified tower

St Gregory's Church is on North End, just off the B6285 at the northern edge of Bedale. There is limited parking on the street near the churchyard. The church was open when we visited and as far as we can determine it is normally open to visitors. 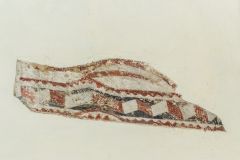 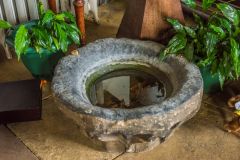 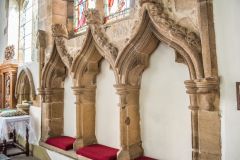 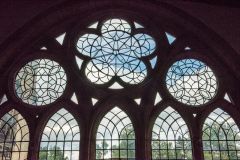