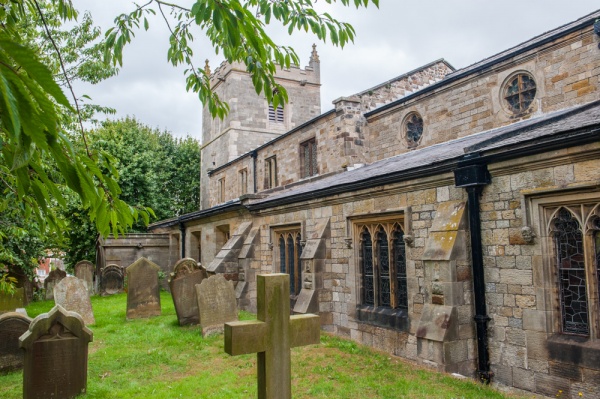 The church of St Oswald stands on a small rise at the west end of Flamborough village. The church first appears in the historical records in 1150, when it was granted to Bridlington Priory by William FitzNigel. A south aisle was added around 1200, and a north aisle some 50 years later. The Norman piers were later replaced by Early English arches and piers. 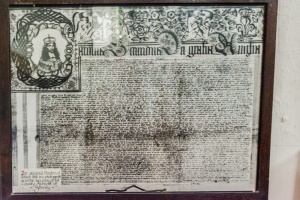 The interior has a number of interesting historical features. In a frame set upon the west wall is The Strickland Pardon, a royal pardon granted by Charles II in 1660 to Walter Strickland, absolving Strickland of high treason, despite the fact that Strickland had supported Parliament during the Civil War and Commonwealth. A translation of the Pardon text appears below the original document.

Near the Pardon is the font, which very likely dates to the early Norman period, and is carved with a design of interlaced diamonds. Below the chancel arch is a beautifully carved ornamental rood screen. The screen is decorated with niches for statues; the statues have long gone but the lovely woodwork remains to enjoy.

A further treasure awaits in the chancel. To the left of the altar is the tomb of Sir Marmaduke Constable (d. 1530). Constable, nicknamed 'The Little' was a larger than life character who served under Henry VI, VII, and VIII. He fought in France and Scotland and was commended by Henry VIII for his bravery at Flodden.

On the tomb is a fragment of a carved skeleton figure showing a curious lump on the chest. This is traditionally said to represent a toad, for legend has it that Sir Marmaduke accidentally swallowed a toad while drinking water, and the toad ate at his heart until he died. 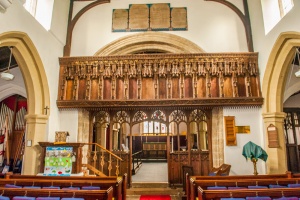 Looking east towards the chancel screen

On that edifying note, we'll pass to one last historical treasure; in the vestry is a framed pair of white ladies gloves made of paper. These are a reminder of a local custom whereby the funeral procession of a maiden was always led by a young girl wearing a pair of white paper gloves. The framed pair were last used in 1761 at the funeral of a certain Miss Major.

The Lady Chapel, on the south side of the chancel, has monuments to members of the local Strickland and Ogle families. The Chapel is enclosed by a beautifully carved 15th-century parclose screen.

A short walk from the church brings you to Flamborough Castle, a ruined 16th-century fortified house. 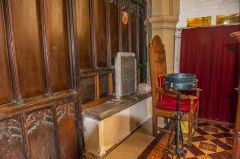 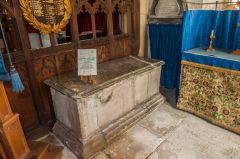 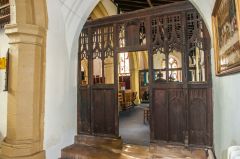 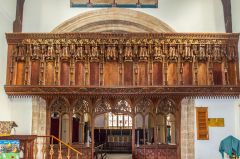 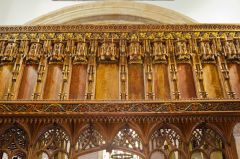