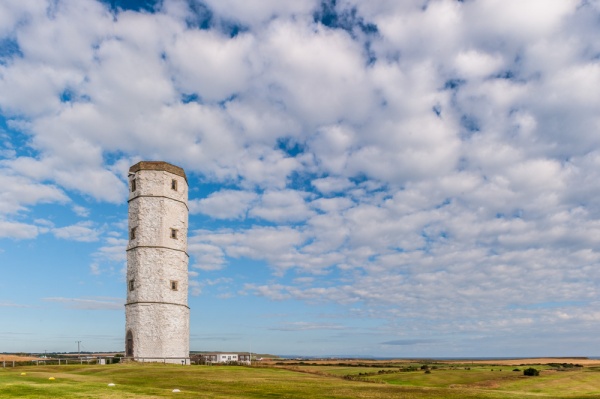 There are two historic lighthouses set on the high chalk cliffs of Flamborough Head. The oldest was built in 1674 and is the earliest known lighthouse still in existence in the UK. It was built by order of Sir John Clayton, on a commission from Charles II. 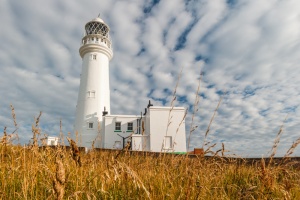 Clayton intended to build two more lighthouses and earn money by charging tolls from ships rounding Flamborough Head. However, Clayton went bankrupt after the Flamborough Lighthouse was built, and as a result, the other two lighthouses were never constructed and the Flamborough one was never used.

This is the first lighthouse you come to as you approach the headland. It was built largely of chalk and was designed to emit light by way of a beacon fire of brushwood or coal atop its roof. It was restored in 1996 at a cost of GBP 100,000.

Today it stands immediately beside the road, just inside the grounds of a golf course. Unfortunately, it is not generally open to visitors, but the same is not true of its near neighbour, the second Flamborough Head Lighthouse.

The newer lighthouse is set much closer to the water. It was commissioned in 1806 and stands 27 metres high. It cost £8,000 to build and used a clockwork mechanism to rotate an oil lamp as a warning beacon. In 1925 the tower was raised to its present height of 85 feet, and in 1992 a 1000 Watt halogen bulb was installed.

The lighthouse is open to visitors for tours throughout the Spring and Summer. Tours are run by the East Riding of Yorkshire Council under licence from the Corporation of Trinity House, who operate the lighthouse. Footpaths lead along the cliffs in both directions for some fabulous coastal scenery. 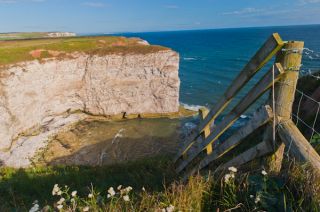