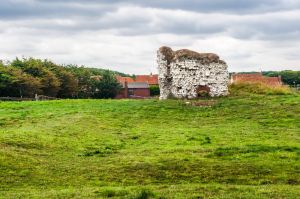 The Constables of Holderness occupied Flamborough from 1090, and it seems likely that they built an earth and timber fortress around that time. We know that there was a fortified residence here by 1180.

As the Constable family grew in importance, they needed a residence to suit their status. In 1351 Edward III granted Marmaduke Constable a licence to crenellate and it seems likely that castle construction began shortly thereafter.

Curiously, Constable received a second license to crenellate just nine months after the first. One possibility is that he was fortifying a second residence on the site of Flamborough Beacon Farm.

The original defences included a rampart wall of clay; this was later strengthened with a chalk curtain wall.

Of these outer defences, only the outlines remain, traceable as bumps on the field. At the centre of the defences stood a pele tower built of chalk with a vaulted cellar and accommodation on two floors above that.

The tower still stands to first-floor level on three sides and is the only real visible reminder of the castle. There is no public access to the ruins, but it is very easy to view the tower from the road, by the war memorial.

The castle was occupied until the death of Sir Robert Constable in 1537. Sir Robert died without heirs, and the castle fell into decay. By the late 18th century it was being used as a farm building.

More self catering near Flamborough Castle >>