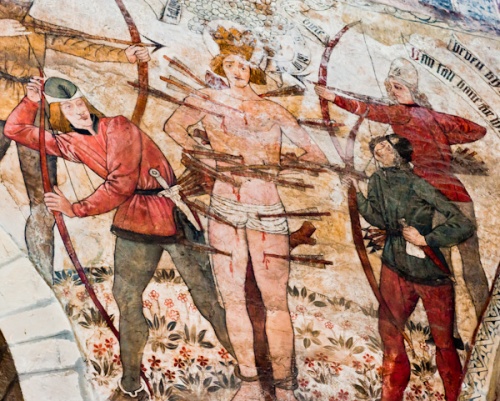 The parish church of St Peter and St Paul in the historic market town of Pickering is famous for its series of medieval wall paintings, which are easily among the best surviving medieval murals in the country. The church is located on a rise at the top end of the High Street, just a short stroll from the walls of Pickering Castle.

We do not know when the first church was built at Pickering but there was a late Saxon church on this spot, of which the font and a section of a cross shaft remain. That early church was rebuilt in 1140. The tower collapsed in 1200, forcing major alterations; if you look carefully you can see that the chancel is wider than the nave and the transept arches are splayed outwards as a result.

The final form of the church evolved over a matter of centuries and now consists of a nave, crossing, transepts, north and south aisles with clerestories, west tower, south porch, and a pair of chapels off the chancel.

The first of these chapels was established as a chantry by Sir William Bruce in 1337. Bruce's worn stone effigy lies immediately beside the lectern and shows him clad in his armour, his legs crossed (not, I should point out, a sign that he was a Crusader; crossed legs was merely a fashionable way to portray knights and has nothing to do with crusading!). Near Bruce's effigy are several beautifully carved 14th-century column capitals depicting grotesques. 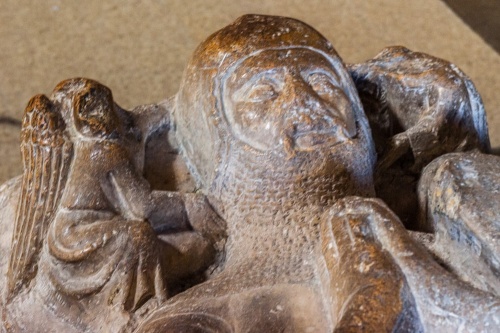 A second chapel was added in 1407 on the south side of the chancel by Sir David and Lady Margery Roucliffe, whose lovely table tomb with alabaster effigies lies against the south-west wall. Other interior features include a monument to William Marshall, not the medieval Earl of Pembroke, but a Georgian agricultural reformer who helped set up the first Board of Agriculture. The pulpit is a wonderful 18th-century wooden affair in the style of Hepplewhite, and there is a 14th-century sedilia in the sanctuary.

Also in the sanctuary is a memorial to Mary, Nicholas, and Robert King, the latter two known for surveying the city of Washington DC. The memorial is suitably marked by both a British and an American flag. We mentioned the font, that is a Saxon survivor from the earliest church on this site, and it is set upon a newer base. The bowl is damaged, probably in the aftermath of the Civil War Battle of Marston Moor or the siege of nearby Helmsley Castle.

All these historical features make Pickering's church a worthwhile place to visit but is the wall paintings that really draw your attention, and rightly so. These occupy the space above the arches on both sides of the nave and are remarkable for their detail, quality of artistry, and wonderful state of preservation.

The paintings were likely commissioned about 1450 and finished by 1460. They were covered with plaster in the religious turmoil of the Reformation, only to emerge again during restoration work in 1852. The then vicar declared that they distracted his flock from his sermons, and had them covered once more with whitewash. This whitewash was removed in 1876, and the paintings were gradually restored to their former glory.

Starting on the north wall, opposite the entrance, we see a stunning picture of a mounted St George slaying a dragon. Next is St Christopher carrying a Christ child, followed by a scene of St John the Baptist being beheaded. 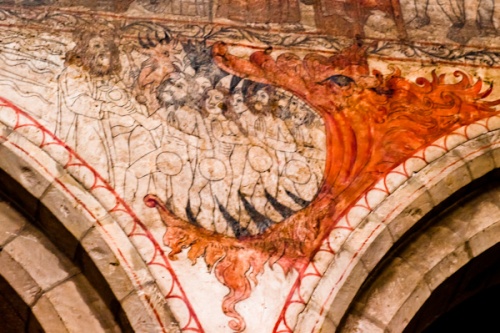 The Mouth of Hell wall painting

Then we see the Coronation of the Virgin Mary and the martyrdom of St Edmund. Above St Edmund, being shot with arrows, we see another martyrdom; the death of St Thomas Becket in Canterbury Cathedral. One interesting point is that the four knights who strike down Becket wear armour in the style of the later 15th century when the painting was executed.

There is no attempt to portray them in historically accurate costumes, which, of course, the painters might not have knowledge of.

On the south side, opposite Becket's death, is a large painting in several layers showing scenes from the life of St Catherine of Alexandria. Next, we see The Seven Acts of Mercy and several different pictures of the Virgin Mary.

There is a strip showing the Passion and Crucifixion, and a very vivid scene of The Descent into Hell, showing a horde of sinners in the jaws of a dragon. This is followed by a scene of the Resurrection.

Taken as a whole, the Pickering murals are an astonishing and vivid medieval survival and make St Peter and St Paul's an absolute 'must-see' destination. 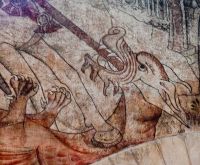 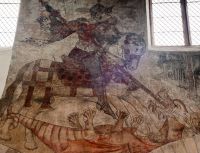 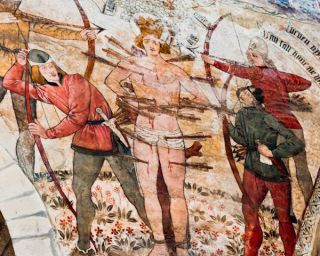 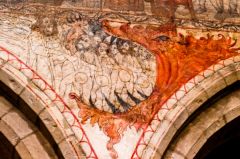 More self catering near Pickering Church >>