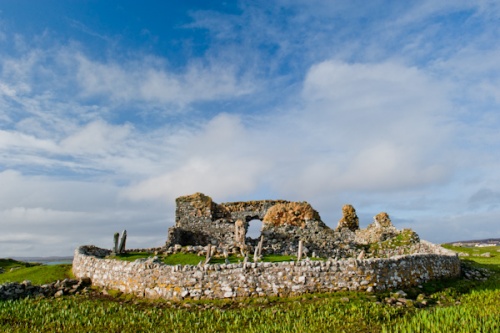 Known in Gaelic as Teampull na Trionaid, this ruined chapel dates to the late 12th or early 13th century. It is traditionally said to have been established by Beathag, daughter of Somerled. The chapel was expanded and rebuilt from 1350-1390 by Ami Nic Ruri, wife of John, Lord of the Isles.

During the medieval period, the chapel became a centre of learning, with a college, or seminary, of priests under the tutelage of the MacVicar family. The most famous 'graduate' of Teampull na Trionaid was the 14th-century scholar and theologian known throughout Europe as Duns Scotus. The chapel fell into disuse after the Reformation and by 1560 the buildings were ruinous.

A short distance away is Teampull Clann Mhic a' Phiocar, the burial ground of the Macvicar family who served the university so well.

The chapel is signposted on the A865 at Carinish (Cairinis). A small parking area leads to a boardwalk across Feith na Fala (Ditch of Blood) and then on towards the chapel. The ditch is signposted on both sides, with the date 1601, and the title Blar Chairinis (Battle of Cairinis) but no details whatsoever, leaving the casual tourist at a complete loss as to the significance of the battle and the name.

Let me pull back the curtain shrouding the mists of time; the Battle of Cairinis was a short skirmish between the MacLeods and MacDonalds, one of an endless number of such 'battles' that marked the history of the Western Isles. It was the last battle in Scotland to be fought with swords and bows and arrows.

The immediate background of the battle is clear; Donald MacDonald set aside his wife, the sister of Rory MacLeod of Harris and Dunvegan. This began a tit for tat sequence of attacks and counter-attacks on Skye and Harris between the two fierce rival clans.

The MacLeods sent a raiding party of 40 men to North Uist under the command of Donald Glas MacLeod. Their mission was to capture goods that the local inhabitants had stored at Teampull na Trionaid. This they did, but they made the mistake of stopping to eat breakfast within the chapel.

A dozen MacDonalds under Donald of Clan Ranald surprised the raiders at their meal and killed all but two. The story of the conflict is remembered in the old Gaelic verse 'Ic Iain 'Ic Sheumais'.

From the Ditch of Blood a fairly obvious trail snakes across the fields to the visible ruin of Trinity Temple. Warning; the fields can be muddy and are well-visited by sheep, so you will definitely want good waterproof footwear that you don't mind getting muddy. 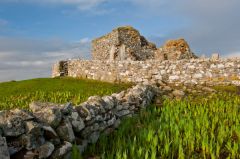 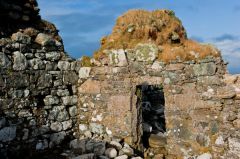 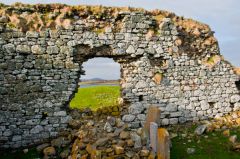 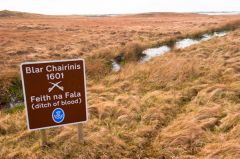 Nearby accommodation is calculated 'as the crow flies' from Trinity Chapel (Teampull na Trionaid). 'Nearest' may involve a long drive up and down glens or, if you are near the coast, may include a ferry ride! Please check the property map to make sure the location is right for you.