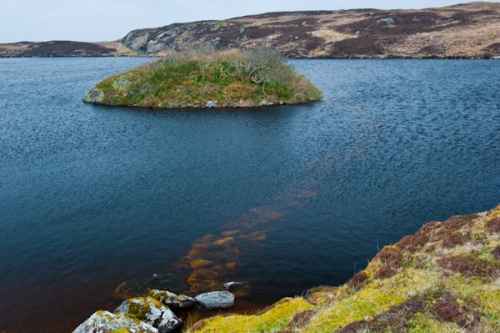 On a small manmade island in Loch Horneray, on the Isle of Grimsay, stands the ruin of Dun Ban, a fortified roundhouse. Rather than thinking of the dun as a unified tower structure, it is probably more accurate to picture a cluster of beehive cells embedded in a tower. It is interesting that there was no apparent attempt to level the internal floor; it is left very rough.

The ruins are quite overgrown, somewhat masking the architecture - indeed, at first glance, it looks like nothing but a tangle of undergrowth, but you soon realise there is much more to the site. A partially submerged stone causeway leads from the south bank of the loch in a curving arc out to the islet.

Excavations in the 19th century revealed a circular tower containing four beehive cells. The walls vary in thickness from 9-15 feet wide and stand to only 6-7 feet. We do not know why the dun was abandoned, but there are traces of fire in several places.

There have been recent examinations of the site, including an underwater investigation, so hopefully more information will be forthcoming about the origin and use of the site.

This has got to be one of the easiest historic sites to access in the Western Isles. The dun is only a few paces to the north-east of the Grimsay circular road, just west of Baymore. 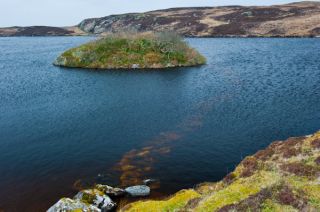 Nearby accommodation is calculated 'as the crow flies' from Dun Ban. 'Nearest' may involve a long drive up and down glens or, if you are near the coast, may include a ferry ride! Please check the property map to make sure the location is right for you.

More self catering near Dun Ban >>