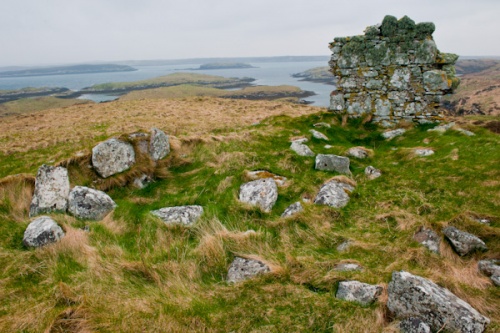 The partial ruins of a 14th-century chapel founded by Amie MacRuari (MacRory), the wife of John, first Lord of the Isles. Lady Amie is said to have established the chapel to serve the fishermen of Kallin, many of whom are thought to have been buried in a nearby graveyard associated with the chapel, though no trace of this now remains.

The chapel occupies a high headland just south of picturesque Kallin harbour. Only one gable end stands to any height; the rest of the chapel is nothing more than scattered stones and turf-covered foundation walls. The entire structure measures only about 23' by 13', within a larger rectangular enclosure about 63' x 54'.

Though there is little enough of the chapel left to see, the location is wonderful, with views north to the hills of North Uist and south to Benbecula.

To visit the chapel, take the southern Grimsay circular road off the A865. At the southern boundary of Kallin look for the Kallin Industrial Site.

If you get to the Kallin fishery access road you've gone too far! Park opposite the industrial site and take the left-hand driveway towards the sore. You will see the chapel ruin on an isolated headland ahead of you.

Good footwear is needed as the going can be boggy, but it is only about five minutes walk from the road.

Take the time to stroll down into Kallin harbour itself; its a very picturesque location with colourful fishing boats and pleasure craft. 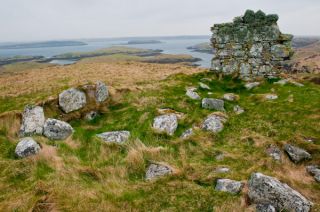 Nearby accommodation is calculated 'as the crow flies' from St Michael's Chapel, Kallin. 'Nearest' may involve a long drive up and down glens or, if you are near the coast, may include a ferry ride! Please check the property map to make sure the location is right for you.