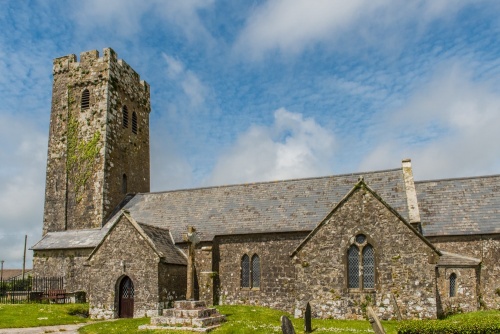 St Twynnell is also named Gwynnoc or Gwynnog, among many other variations. The church was established sometime before 1259 and once belonged to St Nicholas Priory in Pembroke.

St Twynnell was a 6th-century follower of St Cattwg (Cadoc) and was a co-founder of the 'Church of the Three Saints' at Llantrisant along with St Illtyd and St Tyfodwg. The name is a bit confusing; it may be a mangled form of Saint-Gwynno, or perhaps a contraction of the local 'twin wells'; a pair of springs south-east of the church.

The earliest record of a church comes in 1259 when the Abbey of Seyes maintained a rector here. At the same time, there was a daughter church of St Twynnells at what is now Crickmarren Farm, where one of the fields is still known as Church Field.

In 1260 the Priory of St Nicholas, with the agreement of the Abbot of Seyes, granted the church and its lands to the Bishop of St David's. Lands included in the grant encompassed the entire Orielton estate and stretched from the coast inland almost as far as Monkton.

The church is mostly 13th century, with a nave, chancel, sanctuary, and west tower with a ring of 3 bells. Perhaps the most interesting memorial inside the church is to Katherine Owen of Orielton (d. 1698). The east window is dedicated to 2 men from the parish who died in World War One.

Documents suggest that the church once had medieval wallpaintings but if so there is no trace of them today.

The church owns a 1662 solid silver Communion Chalice and a rare, pre-Reformation pewter paten and bread plate. Near the west porch is a medieval preaching cross.

The most striking feature of the church is the tall west tower, pierced with very slender slit windows to illuminate an internal stair. 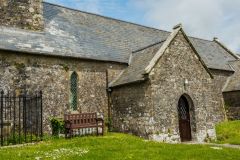 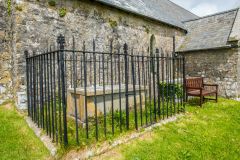 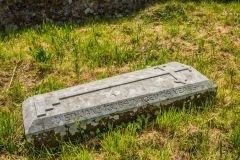