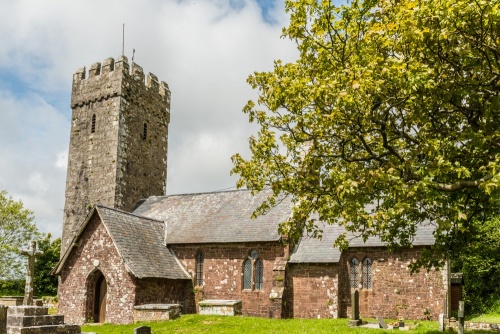 St Petrox is a beautifully situated 13th-century church, dedicated to a 6th-century saint. The church has a tall, narrow tower and was heavily restored in the mid 19th century by Lord Cawdor.

The architect was probably RK Penson, and under Lord Cawdor's patronage he rebuilt the chancel and added a vestry. The church consists of a nave, chancel, vestry, transept, north porch, and west tower. Over the chancel arch is a simple bell-turret, replacing a medieval one in the same spot.

The oldest parts of this attractive church are the north wall and the unusual tower, which tapers towards the top and has corbelled parapets that project outwards. You can make out original 13th-century masonry in the west wall of the transept and the north wall of the nave. The remainder is entirely Victorian.

St Petrox, or Petrocus, was a 6th-century monk, He may have been born in west Wales, but he was certainly educated in Ireland, before travelling to Rome and then returning to Britain to preach in Cornwall. He set up a monastery near Padstow and died at Bodmin around AD 594.

There are several interesting monuments in the church, including a brass to William Lloyd (d. 1674), decorated with a skull and crossed bones, and a tablet to Lady Jane Mansell (d. 1692) on the north wall of the nave. The chancel flooring is made of 19th-century encaustic tiles made by Minton, decorated with the arms of Lord Cawdor. The font is 19th-century but carved in Norman style.

All the windows are 19th-century work. Most are in the form of single lancets but the east window is formed of three lights with a traceried top.

In the churchyard, near the south porch, is a Victorian churchyard cross on a medieval base.

St Petrox church is listed Grade II for its historical interest, primarily for the 13th-century tower.

Be aware that there is no obvious place to park when visiting St Petrox. We managed to find a minuscule layby on the B4319 road that sweeps past the churchyard on our first visit, and on our second visit, we managed to cram our vehicle to one side of the drive leading the caravan park directly behind the church. There really aren't any other places to park, so do be careful. Also be aware that the church is often closed.