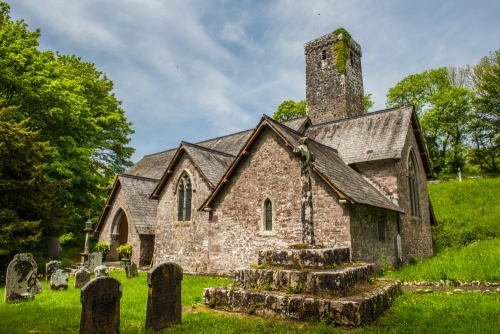 St James and St Elidyr is a traditional cruciform church with a tall, slender tower containing three bells. The church was built in the 12th century, and restored in mid 1800's.

The church is located on Pembrokeshire's Castlemartin peninsula, known locally as 'Little England beyond Wales', a testament to the strong links to England established by the invading Normans in the 12th century. The area has been English speaking since the Norman settlement.

Given the English heritage it is perhaps puzzling that the church is partly dedicated to St Elidyr, or Elidor. The name may simply refer to Elidor de Stackpole, a Norman knight who established a settlement here. It may have been custom to commemorate the founder as a patron saint. It does seem that the church was known simply as St James as late as the 18th century.

In 1851 the 1st Earl Cawdor called upon the ubiquitous architect Sir George Gilbert Scott to restore the medieval church. Scott produced a lovely example of Victorian Gothic, with a tall narrow arch to the chancel, colourful Minton tiles on the chancel floor, and windows with Middle English tracery. Scott left alone the 14th century vaulting in the transepts, and rib vaulting in the Lort chapel. 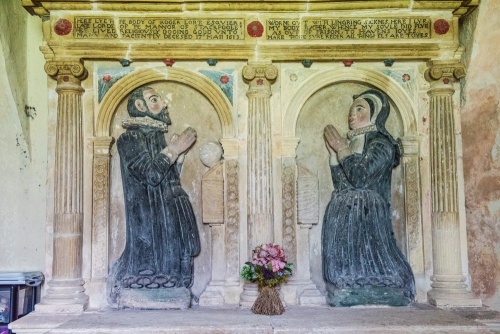 There is a 14th-century piscina in the south transept and a hagioscope, or squint on either side of the chancel arch (though the north squint is now blocked). In the chancel is a tomb chest with two effigies, thought to represent Sir Elidor de Stackpole and his wife, the Lady Elspeth. According to tradition, Sir Elidor fought in the Crusades with Richard I.

In the Lort (south) chapel is a striking monument to Roger Lort, Lord of Stackpole, who died in 1613. Look for the larger monument to John, 1st Earl of Cawdor. Under the east window of the chapel is a worn pillar stone carved with Latin characters, translated as 'Camulorix, son of Fannucus'. We do not know who this represents, but it could be an early Welsh chieftain.

The lychgate is in the Art Nouveau style, designed by Christopher Hatton Turnor in honour of the 2nd Earl. Turnor was related to the Earl, but was an accomplished architect in his own right, and designed the Cairo museum among other notable commissions. The lychgate is considered an excellent example of art Nouveau style.

The church is located in the centre of the hamlet, at the dip in the bottom of the valley. There is a large parking area, though when we visited the sign to the church and parking area was only visible when travelling south through the village. We managed to miss it completely and drove on for another mile before we realised our mistake.

The combination of the Lort memorials and the picturesque setting make Stackpole church a delight to visit. 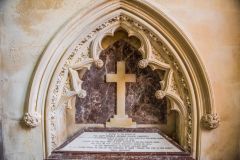 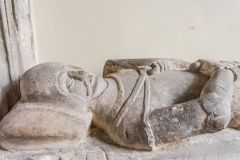 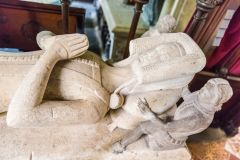