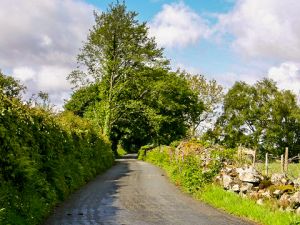 The Roman road entering Brithdir
Earthwork remains of a 2nd century Roman fortlet lie in a beautiful setting east of Dolgellau. Archaeologists found evidence of lead smelting and tanning at the site, which was abandoned around AD 145. The outline of the fort can clearly be seen from the ground.

The fortlet was built at the junction of Roman roads, midway between the larger forts at Tomen y Mur and Pennal. The fortlet occupies the west side of the Wnion valley, and is made up of a level platform with rounded corners, about 54 metres square.

The fort was first discovered from the air, and though no excavations have been carried out within the fort, investigation in the surrounding fields showed that the site was first occupied around AD 74, when a polygonal structure was erected. This first structure was roughly 120m by 100m. Around AD 120 a road was made through the site, and a workhouse and bathhouse built.

The fortlet was defended by 2 or possibly 3 ditches surrounding the entire site. Finds of ceramics suggest that it was occupied from AD 120-145. Unusually for such a small fortlet, the buildings found outside the defences suggest that it was the base for administration and perhaps a civilian settlement, rather than simply an isolated military camp.

Less than a mile to the east is a peculiar earthwork that may have been a funerary monument surrounded by ditches. The monument - if that is what it is - is marked on OS maps as 'Earthwork', and lies directly on a public footpath that runs off the Roman road at Pentreglos and rejoins it at Ty Newydd Uchaf.

The fort site is clearly marked on OS maps, on the northern side of the minor road heading east out of Brithdir village towards Pont Llanrhaiadr, just off the B4416. This route follows the course of a Roman road. 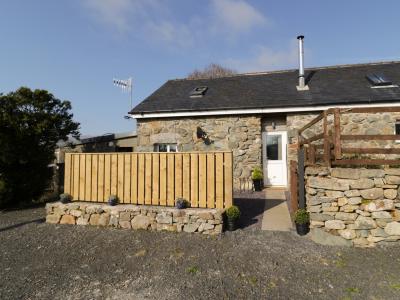 This cottage is resting in the village of Brithdir near Dolgellau and can sleep two people in one bedroom.
Sleeps 2