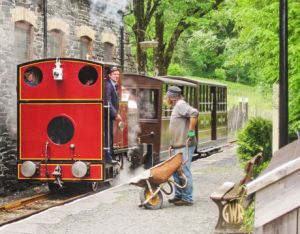 Corris Railway & Museum
The Corris railway was one of Wale's first narrow gauge (2' 3") lines, carrying slate to Machynlleth. The railway closed in 1948, but it has now reopened to passengers, and the history of the line lives on in the museum, chock-full of memorabilia, including old photos.

The Corris railway opened in 1859, making it the first narrow gauge rail line in Mid Wales. The railway linked wharves at Derwenlas with slate quarries as far north as Aberllefenni, with branch lines running to several quarries along the Dulas valley. The rail line was just 2'3" wide, and cars were hauled by horses until 1878 when the first steam locomotive came into service. The gauge is rare; only 3 other lines in Britain used the same width.

From 1883-1930 the line carried passengers. The quarry owners objected initially, claiming that passenger rains would interfere with their commercial traffic. It took an act of Parliament to make passenger traffic legal on the line, and the railway promoted itself as a convenient way for visitors to reach Cader Idris and Tal-y-llyn Lake.

The declining market for Welsh slate in the early 20th century meant tough times for the railway. The Corris railway closed in 1948 and much of the line was lifted up. A local charity group was formed in 1966 to operate a small museum based at what was left of the old rail station in Corris.

The success of the museum prompted volunteers to restore a section of the line running from Corris and Maespoeth, just over a mile away, and trains pulled have been taking passengers on this scenic trip since 2002, a journey that takes roughly 50 minutes and includes a tour of the 19th century workshops and engine shed at Maespoeth.

The route is notable for its extremely tight curves, made necessary by the narrow, winding geography of the Dulas Valley. The steep-sided valley meant that all the stations were very narrow, and carriages and locomotives only had doors on one side.

A custom-built steam locomotive came into service in 2005, but a pair of the original locomotive engines and pieces of rolling stock are preserved in the museum. The museum is only open on days that passenger rains run, so it is a good idea to check the train schedule before visiting. This magnificent converted church rests in Ceinws near Corris, Wales, and can sleep eight people in four bedrooms.
Sleeps 8