Pumsaint Roman Fort (Luentinum)
A 1st century Roman fort was built at Pumsaint to guard the nearby gold mines at Dolaucothi. The fort remained in use until the middle of the 2nd century.

In the late 1960s construction work at Pumsaint village unearthed remains of Roman occupation. Subsequent excavations revealed the foundations of a 1st century auxiliary fort. But when and why was it built?

In AD 75 Sextus Julius Frontinus was named governor of Britain. One of his first acts was to send the Roman legions against the Silures tribe of mid Wales. The fort at Pumsaint was part of Frontinus' efforts to subdue the Silures, and at the same time to seize the gold-workings at nearby Dolaucothi. The fort was defended by turf and clay banks and a double-ditch. The fort was located at the junction of several Roman roads running to Carmarthen and St Davids.

The fort was square, about 490 feet on each side, and enclosed an area of about 5.5 acres. It was in use continuously until about AD 140, and went through several phases of construction during that time.

In 1831 the remains of a military bathhouse was found about 350 yards south of the village. The bathhouse consisted of just 2 rooms, with a floor made of tessellated brick tiles supported on stone pillars 2 feet high. One piece of pottery bears a potter's mark translating as 'From the workshops of Advocisus'. The Victorian description certainly suggests a hypocaust system, but unfortunately the bath house site is no longer open to view.

The fort is known as Luentinum, though the name only appears once in historical writings. It is mentioned in Ptolmy's 'Geographia', a 2nd century treatise on cartography. The name is related to the Brythonic (Celtic) word for washing, probably a reference to the methods used to wash gold ore at Dolaucothi.

Aside from the gold mines at Dolaucothi, archaeologists have traced the route of several rock-cut channels for carrying water to and from the gold workings. Several deeply hewn reservoirs have been found though the main reservoir seems to have been a natural hollow south of the south of the Cynwyl Gaeo road.

Finds of objects from the Pumsaint fort and nearby civilian settlement include a small onyx seal with the likeness of Diana with a hound (or possibly Dionysius with a panther). The best find, however, was a hoard of 2nd-3rd century gold jewellery at Cae Garreg Lwyd (Hoarstone Field), including rings, pendants, and torques, one in the shape of a dolphin. The hoard is now in the British Museum as part of the Payne Knight Collection.

The short answer to 'what to see' is 'not much'. The fort lies beneath the village of Pumsaint, and traces above ground are very hard to see. The real Roman legacy here is the nearby gold mines (highly recommended) but of the fort built to guard the site very little can be seen. Excavations revealed that the village cricket pitch overlies the eastern corner of the fort.

About Pumsaint Roman Fort (Luentinum)
Address: Pumsaint, Llanwrda, Carmarthenshire, Wales
Attraction Type: Roman Site
Location: The village of Pumsaint overlies the fort. The cricket pitch is laid out over the eastern side of the fort.
Location map
OS: SN656 406
Photo Credit: Ssolbergj, licensed for reuse under the Creative Commons Licence 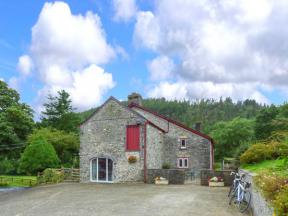 This semi-detached cottage on the owner's working farm is situated close to the village of Pumsaint in South Wales and sleeps four people in two bedrooms.
Sleeps 4