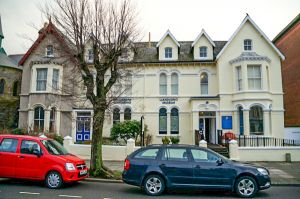 Llandudno Museum and Art Gallery
In 1927 Francis Chardon gave his collection of paintings and art objects to the town of Llandudno. This delightful small museum was founded to showcase Chardon's collection plus archaeological finds and historical artefacts telling the story of Llandudno's early history.

The exhibits are separated into several major categories and time periods, including Prehistory, Roman, Medieval War Time, and The Resort. This last gallery traces the story of Llandudno from a quiet miner's village into a fashionable resort town.

Did you know that Llandudno's heritage as a resort began with a chance remark overheard in a pub? The year was 1844 and Owen Williams, an architect from Liverpool, was enjoying the hospitality at the King's Head pub. Also in the pub was John Williams, a land agent for the wealthy Mostyn family. John Williams happened to overhear Owen Williams say, 'what a fine watering place this would make'. He passed the remark on to Lord Mostyn, and before he knew it, Owen William was engaged to turn the quiet village into a spa resort. The rest, as they say, is history.

And what a history! The Llandudno Museum tells the rich heritage of the town from its prehistory to the fascinating tale of how the village was transformed into a major spa town.

But of course the heritage of Llandudno goes back much further than its more recent role as a resort. See finds from Kendrick's Cave on the Orme peninsula. The caves are named for Thomas Kendrick, who discovered a treasure trove of very early human artefacts, including a decorated jaw bone of a horse, notched deer bones, and human remains. See Bronze Age tools from the Great Orme copper mine, still stained green from copper ore. Other finds include a Bronze Age cremation urn and a human skull from the cave at Pant y Wennol.

See finds from the Roman fort of Kanovium (Caerhun), including a cremation urn, Samian ware pottery, a gaming board, and a fascinating piece of earthenware floor tile imprinted with a child's footprint. See objects from everyday life such as a spoon, key, and a pottery flask.

The medieval collection includes a replica of a carved head thought to depict Llywelyn ap Iorweth (Llywelyn Fawr), found at Deganwy Castle. See a late medieval buckler shield, and an 8th century hand bell from the church at Llangwstennin.

More self catering near Llandudno Museum and Art Gallery >>

More bed and breakfasts near Llandudno Museum and Art Gallery >>

This ground floor apartment is located in Llandudno and can sleep four people in two bedrooms.
Sleeps 4 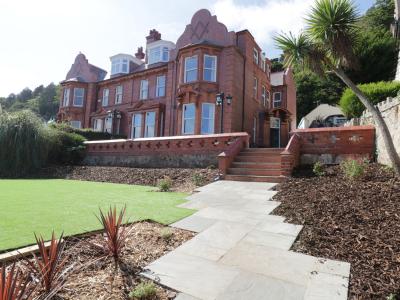 A semi-detached property based in the town of Llandudno in North Wales, sleeping twenty-two people in nine bedrooms.
Sleeps 8