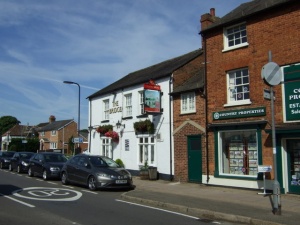 For a time in the 19th century, this market town was an inland port, with canal and river access to King's Lynn and the coast. The river silted up, as rivers tend to do, and Shefford was left to operate as a centre for the straw plait industry.

The name Shefford evolved from Sheepford - no prizes for figuring out how that name came to be! The town crest makes the association abundantly clear by incorporating a sheep's head in the design.

The town was first mentioned in 1225 when it was granted a Royal Charter to hold a weekly market. Several old buildings remain, notably along the High Street, though today Shefford is mainly a commuter town.

The parish church is largely late Victorian, though parts of the tower date to the 14th century. Poet Robert Bloomfield lived at 19 North Bridge Street and is buried in nearby Campton. The quill pen in the town crest is in his memory.

The High Street is the scene of an annual Michaelmas Fair held every October 11, and a weekly market every Friday. Tudor House in the High Street is a brick-faced half-timbered building, and behind the Georgian facades of other buildings lurk early beams and timbers. On North Bridge Street is "The Porch", a 15th-century arcaded building also faced in brick.

A public footpath leads to the scenic outlook on Cockshoot Hill, which provides panoramic views of the Ivel valley. Another path leads to the village of Meppershall, with its castle ruins. The Greensand Ridge Path passes just two miles to the north of Shefford.

More self catering near Shefford

More bed and breakfasts near Shefford