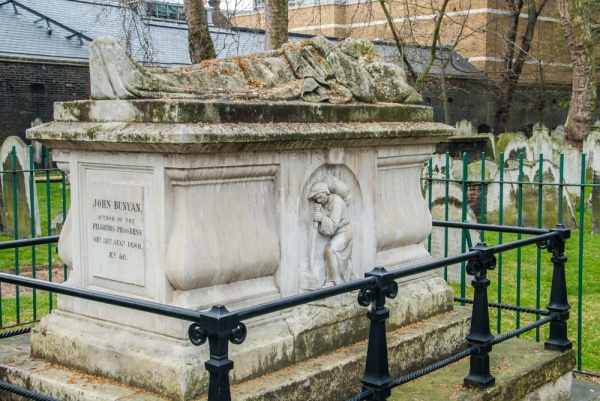 The name of John Bunyan is forever linked with the town of Bedford. Bunyan was born in 1628 just outside the village of Elstow, on the outskirts of modern Bedford. His precise birth site is unknown, though it seems likely he was born in a now lost cottage near two fields called "Further Bunyans" and "Bunyans". A plaque on the supposed site of the cottage was erected in 1951.

He was the son of a tinker, and may well have helped his father in that occupation during his youth. Bunyan reported on his own childhood that he loved to play "tip-cat", a form of rounders, on the village green in Elstow.

Bunyan fought in the Civil War on the side of Parliament and when the conflict ended he returned to Elstow and married a local woman who's name was probably Mary. He had four children with his first wife, including a girl who was blind from birth.

It may partly have been this occurrence that led him to question his rowdy lifestyle and search for a deeper sense of meaning in his life. Bunyan began attending a new religious congregation meeting at St. John's Church, Bedford. He became good friends with the pastor, John Gifford.

When Gifford died, Bunyan took his place as head of the congregation, and he travelled the district preaching, generally out of doors. When the Restoration of the monarchy took place in 1660 preaching was forbidden in an attempt to restrain the growth of Independent Congregations. Bunyan refused to stop preaching, and he was arrested in the village of Samsell. He was tried at Bedford Assizes and ordered held in the County Gaol until he agreed to conform.

For the next 12 years, Bunyan remained in gaol, in generally poor conditions, though he was allowed visitors and occasionally he was allowed out on what we would today consider "day leave". His second wife Elizabeth appeared before the Lord Chief Justice of England, Matthew Hale, to plead for her husband's release, but her appeal was refused.

Bunyan spent his time in gaol writing a number of books on religious themes, including his biography. Most importantly, he produced the religious allegorical novel, The Pilgrim's Progress, which was eventually published in 1678.

In 1672 Charles II issued his Declaration of Religious Indulgences, and Bunyan, along with other religious offenders, was released from custody. He bought a barn on Mill Street and converted the building to a home for his Independent Congregation.

But in 1673 the king was pressured into repealing his Declaration, and Bunyan was cast back into gaol until 1677.

The Pilgrim's Progress was an instant hit upon its publication in February 1678. It has been become one of the most widely published books in history, translated into over 200 languages.

The book recounts the journey of a young man called Christian, to the Celestial City. Despite its overt religious overtone, it is told in a simple language that appeals to a wide audience, Christian and otherwise.

Bunyan wrote a further 40 books before his death in 1688. He is buried in Bunhill Fields, City Road, London.

Resources
Bunyan's Bedford - a guide to sites in and around Bedford associated with John Bunyan's life. Includes information on the John Bunyan Trail, linking places around Bedfordshire with connections to the author.

John Bunyan's Bedford - our own guide to Bunyan sites in Bedford and neighbouring Elstow.