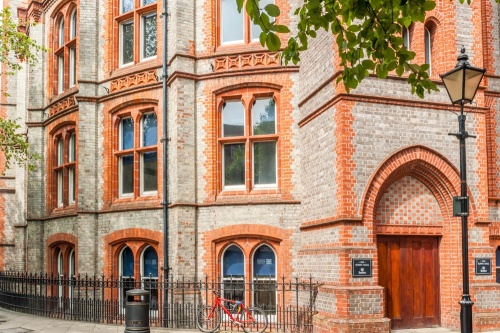 The town of Reading, halfway between London and Oxford, grew up at the confluence of the rivers Thames and Kennet, and the history of the town is closely linked to its position as a navigation hub for the Thames Valley area.

The Kennet and Avon Canal has been reopened to passenger traffic, and once again connects Reading to the sea at Bristol. Visitors can hire narrow boats at Reading to travel the canal or the River Thames, and towpaths along both waterways provide pleasant walking.

Reading is a popular gathering place for swans, which congregate at Thameside Prom near Caversham Bridge.

Reading Museum
Explores the history and development of Reading from early Saxon times. Contains a full-size replica of the Bayeux Tapestry and a display of Roman artefacts from nearby Calleva Atrebatum.

Cole Museum of Zoology
Zoological specimens from across the globe. Much attention is given to dissected specimens, showing visitors at first hand the diverse biology of our planet and its diverse inhabitants.

Museum of English Rural Life
The National Collection of the countryside and farming crafts. On the university campus.

Ure Museum of Greek Archaeology
For something completely different, visit the University of Reading's Classics Department, which hosts one of the largest collections of Greek and Roman artefacts in Britain. 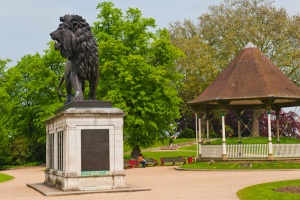 Forbury Park
Forbury Gardens is now a large public park, but in the medieval period it stood within the walls of Reading Abbey and served as a place for holding public events such as trading fairs.

At the centre of the park, beside a bandstand, stands the Maiwand Lion statue, which sometimes serves as the symbol of Reading. The lion is named for the Battle of Maiwand (1880) and commemorates the 329 men of the 66th Berkshire regiment who died in the Afghan campaigns of 1878-1880.

Reading Abbey Ruins
The Abbey of Reading was founded by Henry I in 1121, and it grew to be the third largest monastic house in the country, aided in no small part by the fact that Henry gave the abbey a saintly relic in the form of the hand of St James. Pilgrims flocked to see the relic, now at the Marlow catholic church, and also to see the head of St Philip, donated by King John.

Henry I was buried before the altar of the abbey church, and his two wives, Queens Matilda and Adeliza, are also supposed to be buried here. The last abbot was executed by Henry VIII in 1539 and the abbey was dismantled for building stone.

The ruins of this once powerful monastery lie at the east end of Forbury Gardens, accessed through a subway passage. The inner gateway of the abbey survives, as do parts of the Hospitium, a 12th-century hospital that is now incorporated into a grammar school beside St Lawrence church.

NOTE: As of this writing the abbey ruins are closed off, due to concerns over crumbling masonry. It is to be hoped that the site will be made safe so that people can once more enjoy this historic site. 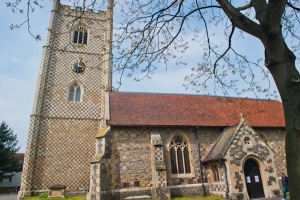 Reading Minster(St Mary's Butts)
Tradition suggests that St Mary's church was founded around 630 AD by St Birinius, though this legend seems more based on fancy rather than fact. We do know that there was a Saxon minster here, and a late 10th-century nunnery. That nunnery was sacked by Danes in 1006, though a 10th century Saxon door survives.

Much of the church was rebuilt in the late 11th century, and again in the 16th century when the striking chequerboard tower was added. This latter rebuilding utilised stones from Reading Abbey. There is a 17th-century screen and west gallery, and a 17th-century font. The oldest memorial is that of William Kendrick (1635). website

St Laurence Church (Buttermarket)
St Laurence is one of three original medieval churches in the centre of Reading. It stands just west of Forbury Park, at the edge of the old Abbey grounds. Immediately north is the old abbey Hospitium, incorporated into the local grammar school.

The front (west) entrance of St Laurence faces onto a large marketplace known as Butter Market, beside the striking Victorian town hall. The church is largely 12th century, with extensive rebuilding in the late 15th century.

There is an early 16th-century font once used to christen Archbishop Laud, interesting 16th-century pews, and a memorial to 17th-century astronomer John Blagrave, decorated with geometric designs.

St James Roman Catholic Church
At the east edge of Forbury Park is the Roman Catholic church of St James. The church is built over the north transept of the medieval abbey. St James is worth noting as it was one of the early commissions by famed Victorian architect AW Pugin, who went on to design the Houses of Parliament in London.

Abbey Gateway
The Abbey Gateway is the best-preserved part of the medieval abbey. It probably survived the attentions of Henry VIII because it was used for administrative purposes. The trial of the last abbot of Reading may have been held in the chamber over the gatehouse, and the gatehouse briefly formed part of a royal palace after the Dissolution.

In the 18th century, the building served as the original location for the Abbey School. Perhaps the most famous student to attend the school at that time was novelist Jane Austen. The gateway was heavily restored in 1861 and retains little obvious medieval stonework. 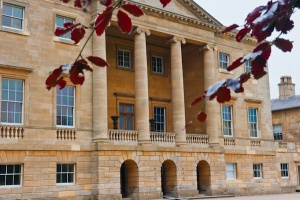 Mapledurham House and Watermill
A beautiful Elizabethan house on the Thames, with one of the last working watermills in the country. Delightful gardens, gift shop and tea rooms.

Stratfield Saye
Home of the Dukes of Wellington since 1817, the house exhibits mementoes of the Iron Duke and an exhibition on his life and times.

More self catering near Reading

More bed and breakfasts near Reading