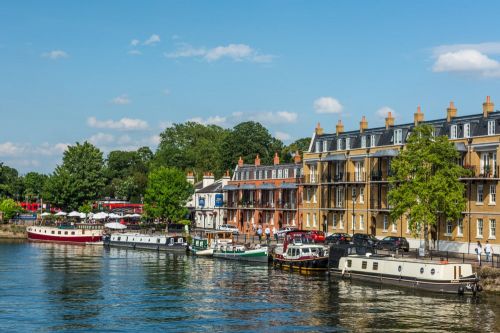 The River Thames at Windsor

To most visitors, the name Windsor means Windsor Castle, but the area has more to offer than the historic grandeur of the nation's most prestigious royal home. Windsor itself is a pretty town, though it is often clogged with tourists, especially in the summer months.

Tip
If you can avoid summer weekends, do so. Windsor is unpleasantly crammed with visitors at those times.

The official residence of the reigning monarch, Windsor Castle began life as a simple wooden motte and bailey structure atop the high bluffs overlooking the Thames in 1070.

Throughout the medieval period, it was remodelled by a succession of monarchs to become an imposing complex of buildings, most of which are open to visitors. Highlights include the magnificent St. George's Chapel and the State Apartments. More on Windsor Castle here.

Across the river from Windsor is Eton, home to the most prestigious public school in Britain. Eton was established by Henry VI in the mid 15th century, and since that time has produced 18 prime ministers and stalwarts of the British upper class. Visit the college's website to ascertain when it may be visited.

Windsor Castle
Daily except for Sunday, 11:00 AM, weather permitting

Mid-July. In an annual ceremony that dates back to the Middle Ages, representatives of the monarch and the Company of Vintners and Dyers record and mark swans along the Thames.

Amusement park with rides made of Lego blocks on a huge scale. Legoland is (expensive) family fun. Ticket reservations are recommended as the large crowds make for a long wait at the entry.

High Street
This pretty late 17th-century building served as a venue for council meetings and a covered corn market. Often attributed to architect Sir Christopher Wren, but the builder of St Paul's was only called in to finish the job after the designer had died.

Church Street
The main claim to fame of Burford House is that it was used by Charles II to house his favourite mistress Nell Gwyn.

Tip
Since the opening of Legoland near Windsor, accommodation in the town can be very hard to come by. If you're planning a visit, do yourself a favour and book well ahead.

More self catering near Windsor

More bed and breakfasts near Windsor