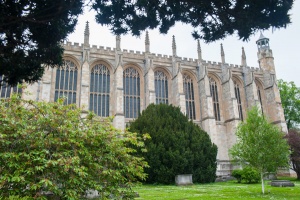 Eton is often the forgotten sibling of Windsor, just a short walk away across the Thames on the Berkshire bank. But the visitors who take the time to cross the river to Eton find an attractive town dotted with fine historic buildings.

The chief attraction is, of course, the famous public school, founded in 1440 by Henry VI. The original name of the school was "The King’s College of Our Lady of Eton beside Windsor", and it was meant to provide scholars for King's College, Cambridge, which Henry established in the following year.

The extensive building that Henry envisaged for Eton chapel would have made it one of the largest and finest in the country, but when Henry was ousted by Edward IV Eton suffered the loss of much of its property, and building on the church ceased.

Bishop Waynflete came to the rescue, however, and provided funds to finish the choir and add the antechapel. The finished structure is a wonderful example of the Perpendicular Gothic style.

The remainder of the school buildings were added over the course of the next several centuries, notably Lupton’s Chapel, finished in 1515. Today Eton is home to over 1300 students. The school buildings can be visited when school is not in session; check the school's own website for current information on visiting details.

I do recommend exploring the college briefly even if the buildings are not open; it is great fun to see the rambling collection of historic architecture with its eclectic mix of buildings from several time periods - and to see the Etonian schoolboys bustling about in their traditional morning coats. 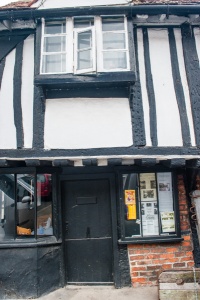 To get to Eton from Windsor you have to cross over Windsor Bridge, built in 1822 to replace a timber bridge dating back to 1170. A toll on bridge traffic was payable until the 19th century, but modern visitors can stroll freely across the Thames!

From the north side of the bridge follow the High Street through the centre of historic Eton. In so doing you are following beside the route taken by royal processions between Westminster and Windsor. The most famous of these processions was the funeral of Jane Seymour in 1537. Seymour, the third wife of Henry VIII, is buried in St George's Chapel at Windsor Castle.

It's a pleasant stroll down High Street; it takes no more than 10 minutes to reach the College, and along the way you pass several interesting historic buildings. Here are a few highlights: 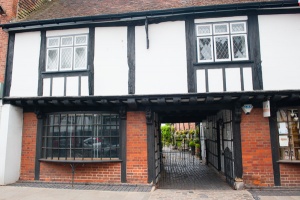 The oldest building on Eton High Street, an attractive 15th-century timber-framed inn, now the Tiger Garden Restaurant. We don't know exactly when it was built, but it is mentioned in documentary evidence from 1465 when it was owned by Thomas Jourdelay, an early benefactor of Eton College

In the 20th century this floor was mistakenly presumed to be a medieval cockpit, hence the common name given to the inn. It was never (as far as we know) a cockpit, but the name took hold and won't let go!

Beside the Cockpit is a red letterbox, dating to 1854. This is one of the earliest of the familiar letterbox designs still in use.

Across the road from The Cockpit is Turks Head Court, an attractive timber-framed building with a passage through the centre. If you duck through the passage you can see a row of pretty cottages on either side of a narrow lane - timber-framed, whitewashed on the left and red brick on the right.

Just a bit further along is a simple brick building with matching red doors flanking a green-painted central double door (currently the Eton Ex Service Men's Club). A plaque above the door reminds us that this building and the adjoining school was established by Mark Antony Porny, a French Master at Eton College until his death in 1802. Porny's real name was Antoine Pyron de Martre; Porny being an English mangling of his birth name. 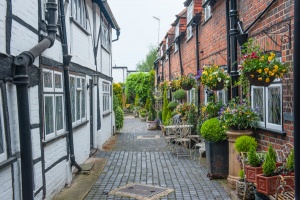 On the west side of the street, you pass the Christopher Hotel, a former coaching inn which dates to 1511.

On the west side of High Street, down a treed path, is St John's church, built to a Victorian Gothic design in 1852. Only a small chapel on the upper floor is used for religious services today; the remainder is used as a doctor's surgery and the Eton College Sanitorium.

Just before you reach the college you pass over a small iron bridge almost without realising it. There has been a bridge here since the 13th century; the current iteration is wrought-iron, built in the 19th century. Barnes Pool is a backwater of the Thames and has been a popular location to paint the college for centuries.

I loved exploring Eton; certainly, the college gets pride of place, but the High Street is well worth a slow ramble, and as an added bonus it is likely to be far less crowded than Windsor across the river! 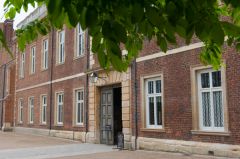 More self catering near Eton

More bed and breakfasts near Eton