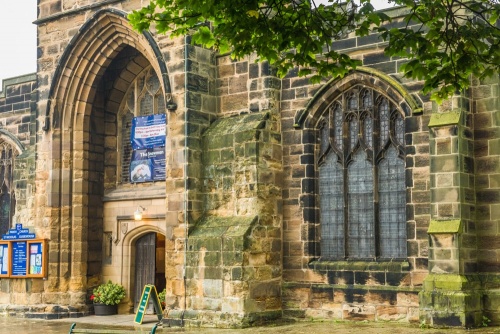 The Domesday survey of 1086 mentions a church in the market town of Guisborough but no evidence of that early building survives. In fact, we aren't even sure if it stood on the same site as the present church.

In 1291 a papal document mentions a church beside Gisborough Priory (note the difference in spelling), which might refer to the present building, but the earliest parts of the present church date to around 1500. The first curate is not recorded until 1535.

That 16th-century building was restored in 1790 and again in 1904-08 under the direction of the architect Temple Moore. 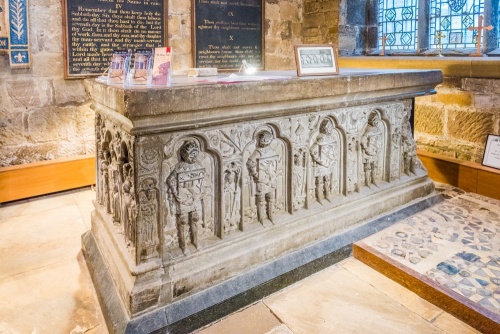 The highlight of St Nicholas' church is the De Brus family cenotaph just to the right as you enter through the west door. The cenotaph takes the form of a Renaissance altar table, with exquisitely carved sides.

This is not and has never been a tomb; no one is buried in or under the cenotaph. Rather, it is a memorial to the de Brus family, possibly erected by Margaret Tudor, the Queen of Scotland, to mark the 400th anniversary of the foundation of Gisborough Priory. It was erected inside the priory church in memory of the De Brus family of Annandale and Skelton.

Shortly after the Norman Conquest, William the Conqueror gave large estates in what is now Cleveland to a Norman knight named Robert de Brus. The first family seat was at Skelton, where the family built Skelton Castle around 1140. Robert de Brus II was given estates in Annandale, in what is now Dumfries and Galloway. His descendants in Scotland became the Bruce family, one of whom took the Scottish throne as Robert Bruce. 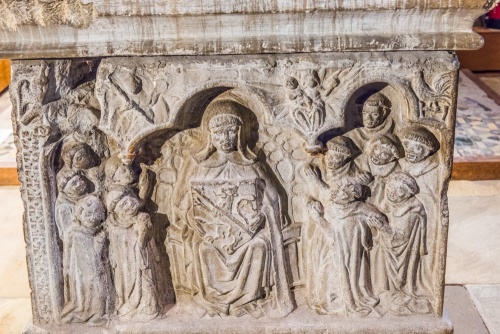 A prior and canons from the De Brus Cenotaph

In 1119 he founded Gisborough Priory, which became one of the wealthiest monasteries in northern England.

The Cenotaph is made of marble quarried at Egglestone. The north face of the cenotaph is carved with five figures of De Brus family members from Skelton, separated by the Four Doctors from the Bible; Jerome, Gregory, Ambrose, and Augustine. The south face shows five de Brus family members of Annandale, separated by the Four evangelists; Matthew, Mark, Luke, and John.

The east end shows a prior with kneeling canons. The west end has been damaged, but historians think it may have depicted a king, possibly King Robert Bruce of Scotland. 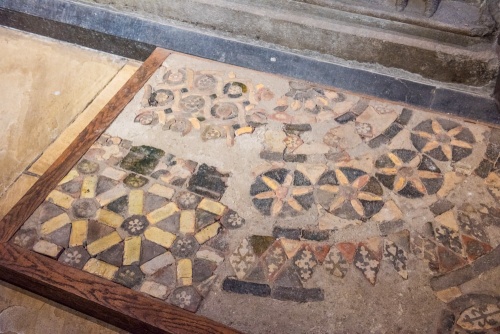 At the east end of the south aisle is the Chapel of Our Lady and St John the Baptist. This area was originally used for the Chaloner family box pew. The Chaloner family vault is under the chapel floor. In the chapel window is a medieval figure of Christ, and on the wall is a stone cross rescued from the Priory ruins. 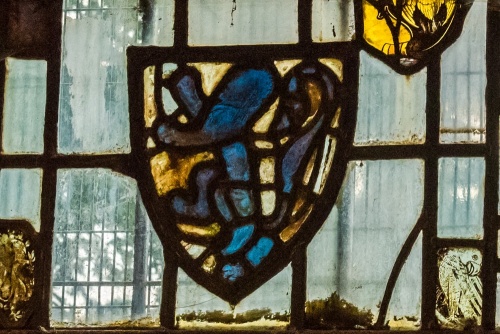 Near the chancel arch is a floor plaque to Susanna Pickering (d 1641). Near the pulpit is a Victorian font installed in 1875 and on the wall above it is a memorial to Dr Stainthorpe. Look for the winged bull symbol, the emblem of St Luke the Physician. The next window to the west is the Bramley memorial window. Look for a half-eaten apple in the window design, a play on the family name of Bramley.

St Nicholas' Church is usually open to visitors and was open both times we visited.

The church is immediately beside the gates to the Gisborough Priory Ground on Church Street. There is a small paid parking area next to the church. 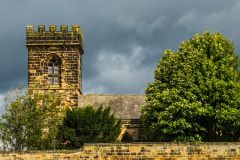 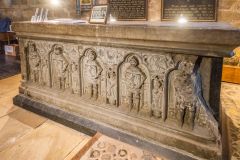 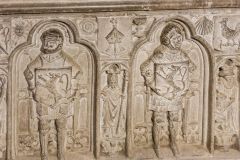 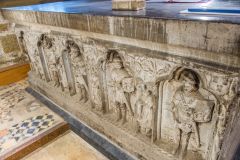 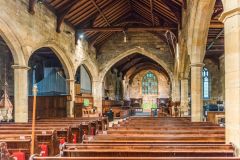 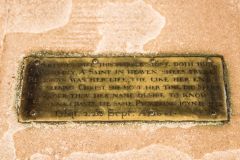